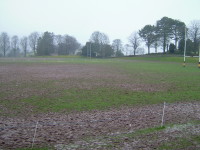 A public school in Cumbria renowned for its sporting prowess has seen its playing fields vastly improved, thanks in part to Barenbrug grass seed mixtures.

Founded in 1525, Sedbergh School boasts one of the best school rugby clubs in the country and so requires playing surfaces to match its players' abilities. Sedbergh's head groundsman, Martin South, is tasked with keeping the independent school's rugby and cricket pitches up to the high standards expected.

After consulting with the specialist grass seed breeder's area manager David Greenshields, Martin was persuaded to switch to Barenbrug four years ago. He hasn't looked back since. "We use BAR 7 on our rugby pitches, BAR 10 RTF on a few problem patches, BAR Extreme on our cricket squares and a custom blend on our outfields" he says. "Given we're using the same nutrient and mechanical inputs, there's quite a difference in performance and appearance with Barenbrug."

With the school's rugby pitches getting a pounding up to four days a week in-season, Martin has found BAR 7 sports perennial ryegrass has particularly improved their wear tolerance. "Ours are hugely-used rugby pitches subject to some horrendous weather. The wear quality has improved and I'm very happy with the colour too. Each year, we have a competition at end the of the rugby season in March and the pitches get absolutely trashed. But this year, because of the year-on-year improvements, we've got some pretty astonishing before and after photos." 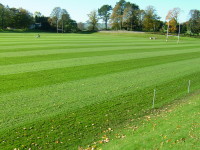 Martin has also found the deep-rooting capabilities of BAR 10 RTF has helped stabilise areas of the pitches prone to water-logging. "The RTF is quite heavily seeded into the first and second team pitches - mainly in the scrummage areas where it's very wet," he continues. "It gets quite 'squidgy', so we needed something to improve it. We've definitely seen a change with RTF - we've got better wear and it's more stable."

Overall, Martin is delighted with the rugby pitch improvements - vital given 38 'Old Sedbergians' have gone on to represent their country, the most notable of which are former England captain Will Carling and World Cup winning centre, Will Greenwood. "This school is renowned for its rugby and, given the wear the pitches get, I'm more than happy with the Barenbrug's performance."

Martin is just as pleased with BAR Extreme's performance on the cricket squares, as well as the special BAR 6 mixture on the outfields. "The special mix went in last year and is maturing now," he reveals. "We wanted to get some finer grasses in there to smooth it out and improve play, but which were able to compete with the coarse grasses. We're mowing at our winter height of 16mm at the moment and you can really see the finer-quality grasses coming through. It looks great."

As part of his ongoing relationship with Barenbrug, Martin is also trialling an in-development mixture on his cricket squares. "I'm very excited about the trial, but I've been told I can't talk about that just yet! But overall it's been very interesting working with Barenbrug and it's nice to see all your efforts come to fruition.

"The grass colour and presentation is better for prospective parents who we're trying to impress - they always comment positively. I've always believed in investing in good-quality grass seed, but I do see a marked difference with the Barenbrug."