It is the golf course where Bernhard Langer famously played a televised shot out of an ancient ash tree. It is also where seven crew members of a Halifax bomber lost their lives during take off on a bombing mission to France during the Second World War.

Just one mile from the historic city of York lies the magnificent Fulford Golf Club, steeped in history, and which celebrated its centenary in 2006. The current layout was designed by Major Charles MacKenzie, brother and business partner of Dr. Alister MacKenzie (he of Augusta fame). Over the years it has played host to many important amateur and professional tournaments.

Major winners such as Seve Ballesteros, Nick Faldo, Sandy Lyle, Greg Norman and Ian Woosnam have graced the fairways of Fulford when, for twenty years it hosted the Benson & Hedges, Sun Alliance, and Murphy's Cup tournaments as well as hosting the inaugural British Ladies Open Championship.
But, it is surely the image of a flaxen-haired Bernhard Langer clambering twenty feet up the magnificent ash tree by the 17th

green, to play his third shot from the branches, that sticks in the memory.

Fulford has a reputation for having some of the best greens on the European Tour. Clearly, they were to Ian Woosnam's liking in 1985 when he blitzed round in just 62 strokes, still the 'all-comers' record.

The course remains very popular with over 30,000 rounds of golf being played every year by its 700 members and visitors alike.

Fulford is managed by a team of seven Greenkeepers. Mark Mennell is Head Greenkeeper and is is the longest serving employee at the club. He is in his thirty fourth year, seventeen of which have been as Head Greenkeeper.

Mark has seen many changes at the club during his time and has had to keep pace with ever changing maintenance regimes. "We are seeing a return to a minimalist approach to feeding, topdressing and watering again. In recent years we have substantially reduced the inputs to greens, tees and fairways. We will occasionally apply a liquid organic feed to the fairways but that is about it."

"We have also reduced the frequency of topdressing on the greens. Where we used to do it several times a year we try and do this just once, or twice, if absolutely necessary."

The greens at Fulford are fairly large and flat averaging 550 square metres in size and are the pushed up soil type.

Work begins on the greens mid to late April when they are verticut using thatchaway reels, aerated and topdressed by hand with 70/30-fen peat and kiln dried sand rootzone mix. This is applied at a rate of 1-2 tons per green.

The greens are then dragbrushed and oversown with a bent/fescue seed mixture. They are mown every other day until temperatures and growth rates increase to a level when mowing is required every day to maintain a summer height of cut of 4mm. Greens are mown at 6mm during the winter months.
The condition of the greens will dictate whether Mark applies any further topdressing materials. None is applied throughout September and October to minimise damage to leaf tissue and to reduce the threat of fusarium attack.

The benefits seen from reducing the amount of topdressing are less disease, reduced plant stress and damage from abrasions, together with less damage to bottom blades and the subsequent financial saving in material costs.

Greens, tees and fairways are aerated on a two to three week cycle, varying the type and size of tines used. A combination of aeration machinery is used throughout the year. The main aeration aids are the VertiDrain, John Deere Aercore and SISIS Slitters.

The greens aeration programme has changed very little during Mark's time - they are solid tined to a depth of 150mm every three weeks throughout the playing season and, come autumn, are deep slit or vertidrained to a depth of 300mm.

The staff spend a lot of time walking the greens inspecting for weed disease and repairing foot marks and pitch marks. The greens get a lot of verticutting throughout the year with the aim of keeping thatch to a level below 2mm. During the winter the greens are fed with a low dose of nitrogen liquid fertiliser and a dose of potash to help retain sward density and colour.

The course does have an irrigation system capable of watering tees, greens and parts of the fairways. However, Mark will only use it as a last resort to restrict his watering programme to a minimum. For example, last year he only used 1685 cubic metres of water for the whole course. During hot spells he tends to use the irrigation system to cool the surfaces down applying about three minutes of water per green.

This is supplemented by a programme of hand watering when, every morning, a team of four staff will go out and walk the greens and hand water them whilst, at the same time, applying a wetting agent.

Cutting heights on other grass areas are: collars 8mm, tees 8mm and fairways 10mm all year round. Semi-rough is kept at 50mm and rough at 100mm.
The feeding regime is kept to a minimum with a combination of granular and liquids feed being applied throughout the growing periods. A granular 5:0:14 is applied in April and followed up with a liquid iron programme as required. Further applications of fertilisers are applied - a seaweed extract of 14:0:9 and, in the autumn, at 5:0:28.

Following an ecological report by the STRI's Bob Taylor in 1997, hundreds of silver birch and scrub oak, that had been encroaching into playing areas were removed, much to the members dislike at the time. However, this has resulted in the return of the heathland type grasses, molinia etc. replacing the rye grass and Yorkshire fog, and reinstating the natural heathland appearance of Fulford.

Mark explains that spraying on the golf course has also been cut back dramatically. "Twenty years ago we were spraying regularly for fusarium but, since the reduction in topdressing and fertilising, we only spray very occasionally now. If we notice signs of fusarium in April or May we leave it and let nature take its course, knowing the scars will take care of themselves during the coming season. We do spray every November and December for leatherjackets. Another problem on the greens and fairways is worm casts. For this we spray carbendazim, but it is still a problem. One way of tackling it, we are finding, is regularly spraying with sulphate of iron to try and acidify the soil more."

"Much of the winter work, outside the general day to day upkeep of the course, consists of replanting the gorse and heather plantations to maintain the character of Fulford. In addition, tee reconstruction is ongoing, with the aim of increasing the course length to around 7,000 yards. A number of tees have already been redesigned this year and we will undertake the rebuilding of the 11th tee this winter. We have our own turf nursery for repairs and reconstruction works utilising the natural grasses found on the course."

"As one of the premier golf courses in the UK our aim is simple - to remain in the top one hundred and keep a high profile in both professional and amateur golf." 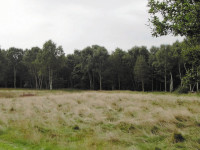 Fulford and the STRI

The STRI's Ecology and Environment Unit have been working with Fulford Golf Club for almost a decade. In that time significant changes have been implemented over the course. Since 1999 work on the course has been guided by an Ecological Management Plan, produced by the Ecology and Environment Unit. Recognition has been given to course/turf condition, playability and the ecological value of the habitats that are such an important and integral component of the course. Indeed, it is the relationship and proximity of the rough along individual holes that has elevated the prestige of this wonderful course.

A lot of work has been focused on improving light and airflow to the greens and tees which, in turn, has significantly impro 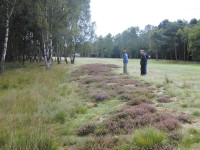 ved their health and reduced the need for pesticide use. The back of the 6th green is a good example. Problems can arise with turf surfaces when they have insufficient access to light and air movement. The turf surface remains damp for much of the day and this can lead to weak, thatchy, disease prone turf. The encroaching wood edge to the back of the green has been pushed back and selective tree thinning has been employed under the guidance of the STRI's Bob Taylor, so reducing the cauldron effect of the trees.

Fulford have implemented tree thinning programmes around several tees and greens in order to increase the passage of light and airflow and this has served to improve the health of the playing surfaces. To the left of the 6th green, a glade has been cut through the woodland in a south easterly orientation to allow early morning sunlight onto the green, and to create views through to neighbouring holes. This has both improved turf quality and has created a more open environment within which to play golf. Golfers now regularly see deer crossing the ride into the different section of the woodland. 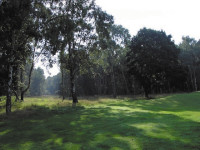 Sufficient woodland has been retained to accommodate barn owls which return to nest in one of the two boxes provided in the woodland. Interestingly, both boxes at different times within the same breeding period tend to be used by the owls. Chicks have been seen to be moved from one box to the other and this is perhaps as a means of ensuring security and safety.

Heather regeneration has formed a significant part of the work carried out at Fulford over the last seven or eight years and is still ongoing. Heather trials have involved turf stripping and scarification to disturb the dormant heather seed lying just a few centimetres below the surface. Heather seed will remain viable in the soil for many years and the action of vegetation clearance, coupled with the disturbance of the surface, is often all that is required to encourage heather germination and establishment.

The heather trials initially put in place on the 11th hole have been very successful and have since been expanded to increase heather elsewhere. This now forms a significant visual feature on the course. Heather is in rapid decline on UK golf courses through a combination of inappropriate management and trampling pressures and, as such, the work being carried out at Fulford is certainly worthy of commendation. 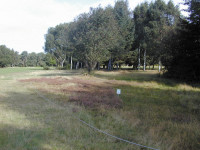 The provision of deeper rough grassland around the course has markedly increased over the last few years. Its presence serves to add significant definition to each hole and is a striking visual feature. Rough grassland is also extremely beneficial for wildlife. The team at Fulford have implemented a rigorous programme of cutting and scarifying these areas, with a collection of all arisings, in order to create a sward that is open and fine in nature with only a small presence of any courser grasses. This has created rough grassland that is, although penal and an added challenge, still practical in terms of ball retrieval and playability.

Overall, the changes at Fulford have created a course that is not only more visually appealing but is also more strategic for the golfer and more challenging. Wildlife value has also increased markedly. The prestigious status of Fulford Golf Club is well known and here, as elsewhere, prestige is closely related to course condition, playability and the aesthetic contribution that the rough has on each hole.

The above is directly attributable to ongoing proactive and directed management planning and intervention. A programme that is well enshrined at Fulford.