A worrying disease that attacks the capital's most iconic tree has been confirmed in London. The disease, Massaria (Splanchnonema platani), was previously found only in Germany and Holland but has now been discovered in the UK. 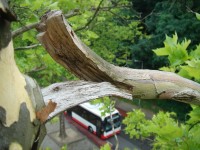 The disease affects London Plane trees (Platanus 'x' hispanica). Whilst London Planes are not native trees as they were introduced to the UK over 300 years ago, they now form an integral part of London's landscape. The tree was such a significant feature of the capital that it became know as 'London' Plane. These are some of the tallest of the capital's trees and one of the most planted.


London Planes are notoriously disease tolerant; have very few current threats from pests and disease; and are very resilient to changes in environmental conditions. The discovery of the Massaria fungi in the UK poses a real threat to this tree species in England's capital and presents a huge problem for the specialists that manage them. This fungi can rapidly decay branches, making them liable to fall. It was originally only thought to affect unhealthy trees but has now been found on healthy trees as well. 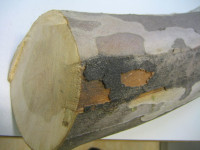 As it was first identified in Europe during 2003, there is very little known about how the disease spreads. Once the disease has been confirmed, the only solution is to remove any branches that show signs of the infection to prevent the them from failing. This unfortunate branch removal could lead to the disfiguration of many beautiful trees. Currently, there has been no need to remove any entire trees. Due to the speed that the disease decays branches, some Local Authorities are changing their inspection programs for all London Plane trees in high risk areas. At a time when councils are having to find significant cuts this disease demands that Tree Officers undertake more inspections and pruning work that will compound the financial problems for tree managers.

This picture shows an example of an infected branch. The top half of the branch shows the decayed deadwood due to the Massaria infection and the bottom half shows live wood.