One of the most enjoyable parts of my job is getting out and about to meet the groundstaff and greenkeepers working on their 'patch', taking the time to exchange views about our industry and, more importantly, finding out what makes them tick.

So, when I got a call from Lee Jackson, Head Groundsman at the Etihad Stadium asking if I wanted to help out, as he had a man down for their home match against Tottenham, I jumped at the chance.

I arrived at the ground at 9.30am on Sunday morning after a traffic free journey up the M6 and into Manchester. Lee had arranged to meet me at one of the club's car parks to get me through security.

Lee and his assistant, Darren Farnell, had already been at the ground since 7.00am, cutting the pitch with their Allett Buffalos and marking out. I got there in time to see Lee marking out the very last touchline.

Kick-off was scheduled for 1.30pm, and all that remained to be done was to take off the small lighting rigs from the goalmouths, set up the temporary practice goals and water the pitch.

Lee explained that much of the pre-match preparation had been done following the last home fixture; a UEFA Champions League match against Dutch side Ajax the previous Tuesday evening, which ended 2-2 and left City in danger of missing out on the knock-out stages, much to Lee's chagrin as he is a life-long supporter. 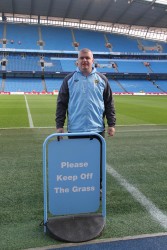 The weather had been kind in the run up to the Tottenham game, with very little rain. Immediately after the Ajax game, the pitch was divoted and then cleaned up with pedestrian rotaries. On Wednesday, it was sprayed with a liquid feed and the small lighting rigs were put into the goalmouths. No work was done on Thursday, allowing the pitch to rest

The pitch was then hand brushed and given a single cut - at a height of 27mm - on Friday and Saturday, leaving Lee and Darren to complete the work on Sunday.

Like most modern stadium pitches, the remit is to refrain from putting any heavy machinery on the pitch, so most of the work is carried out using pedestrian equipment.

The pitch at the Etihad Stadium is a Desso Grassmaster, installed in 2010 by John Mallinson. According to Lee, it performs very well, but needs a lot of attention in respect of feeding, controlling hardness and ensuring the fibres remain upright. Keeping the surface clean is also a key factor to its success.

The soil pH of the latest Desso Pitch is a lot lower than the previous one. Current readings are around the 4.9-5.2 mark, whereas the old pitch used to be just over 7.

Lee was keen to show me how well the new Desso was performing. Even after back to back games the grass in the goalmouths was holding up very well. Here, Lee raises the height of cut by a few millimetres to give it, as he says, a fighting chance which, along with the lighting rigs, appears to be doing the trick.

The club has invested heavily in lighting rigs for the stadium, buying nine large MU360 rigs and six smaller rigs which, says Lee, have made a significant difference in promoting growth and recovery during the winter months. All the rigs are stored within the stadium, being stacked against every available side wall!

Lee is able to activate the watering system from the comfort of his office. An external video camera relays a live view of the pitch which shows which pop-ups he wants on and, hey presto, with the press of a button, on they come. Usually, in mid November, a quick full cycle is all that is required.

At midday, both teams arrived and the stewards took their places as the match day atmosphere began to kick in. Roy Rigby, the club's Grounds Manager arrived, along with the rest of the match day groundstaff.

The club employs twelve groundstaff in total, three at the Etihad, six at the Carrington training ground and three at their Platt Lane facility. On match days, eight members of staff are required to be on duty. This usually consists of Roy, Lee, Darren, Gary Conway (also based at the stadium full time but on paternity leave when I visited) plus four others.

In a quiet moment, and there are not many of them, Roy tells me how pleased he is with, what is, a fairly young team. He confesses that he is a stickler for training and puts his staff on numerous courses, the latest being a trip to Ireland, which Lee organised, to catch up on the latest developments on nematode control with Dr Colin Fleming Fleming, which seven of the club's groundstaff went on and took place the day after I visited.

Back to the match. Lee likes to wait by the players tunnel to meet delegates, officials and players prior to kick off. He confesses that it's mainly to make sure that everything is set-up and ready to everyone's satisfaction, but he also takes the opportunity to remind the coaches of designated warm-up areas.

With this game being on Remembrance Sunday, the pitch also had to cope with servicemen parading on and around the centre circle. 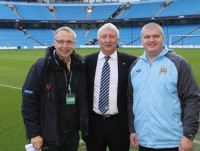 I joined Lee at pitch side and was introduced to a number of people, including past player, Mike Summerbee, a City legend who attends all of the home games.

With warm-ups completed, the staff, with yours truly in tow, are out on the pitch to remove practice goals and repair scars, especially around the fast feet drill areas.

With the two team emerging from the tunnel, we make a hasty retreat to the corner of the ground, where we are able to watch the game. Some of the staff grab a cup of tea and some food. Lee introduces me to Rose who, for close on thirty-six years, has run a cafe bar for the freelance photographers; here, the groundstaff take full advantage of her catering skills.

Like most top flight sporting fixtures, time seems to pass by very quickly. At half-time City were trailing 1-0. Lee was keen to point out that the club had not lost a home league game in thirty-five matches, stretching back to December 2010 at the time of my visit, and if they lost this one, he would blame me! With very few divots to repair, thanks to the Desso surface, and the pitch still damp and, therefore, not requiring watering, we returned to our seats to watch the second half. I took the opportunity to catch up with Roy and find out what he had been up to.

The club, under the guidance of Roy and other key head groundsmen, has seen a substantial investment into the pitches and training grounds in recent years. It was only three years ago we featured an article describing the £2.5 million being invested at the stadium, Carrington and Platt Lane.

Since then, the club has continued to invest. As mentioned earlier, a new Desso pitch was installed at the stadium in 2010 at a cost of £800,000, along with new machinery and resources for the ongoing maintenance of all of the club's pitches. The latest project - a new £200 million training ground adjacent to the Etihad -is currently at the start of construction with completion set for June 2014. If successful, the facility will boast sixteen and a half full size pitches (fourteen and a half natural grass and two top spec artificials - one indoor and one outdoor) with a raft of community use buildings.

Roy joined the club in 2001, after working at Blackburn Rovers training ground for twelve years. He manages a team of twelve staff across all the sites and isn't afraid to trial different products. In order to keep track of his work, Roy keeps a diary of any problems he encounters, large or small, along with his actions to rectify them.

Roy dedicates so much of his time to researching new technology and management techniques, in order to improve the overall playing performance of the pitches, that some people joke he loves grass more than his wife! But, Roy counters that he enjoys being at the top of his profession, and that it's important for him to understand the new products on the market, and to be able to choose the very best to establish and maintain the pitches to the highest possible standard.

This year alone, Roy has been on two fact finding missions for the club, one to recce the pre-season venues in France, Portugal and Austria to choose the most suitable training pitch facilities, and the other to inspect and oversee the laying of a new pitch at the Bird's Nest Stadium in Beijing for the club's pre-season friendly against Arsenal.

Roy spent a week in Beijing ensuring that the final playing surface would be safe and level for the fixture. This involved preparing the surface levels, ensuring the big roll turf was of uniform thickness, and remained in good condition whilst waiting to be laid. It was important that it did not sweat in the humid conditions. Butting the turf together, smoothing the joints and rolling to firm and maintain levels is a relatively straightforward job in

the UK when you have all the correct equipment but, in the Bird's Nest, the whole job was done by hand. The only machinery used was a crane to lift the rolls into the stadium, the rest of the work was done by around seventy labourers.

It took several days to complete the turf laying but, following some aftercare maintenance and watering, Roy was satisfied that the pitch would be able to accommodate the match and the two teams' valuable players.

Roy also oversees all the testing and monitoring of Man City's various pitches. He regularly takes Clegg Hammer readings to test for firmness, opting to achieve a reading of between 65-88 gravities. He will take twenty-four readings from every pitch and average out the scores to get his overall result. To date, with the correct watering, aeration and maintenance programmes in place, the groundstaff have managed to keep within the target levels.

Roy also monitors thatch content and nutrient levels, using a range of agronomic tools, as well as independent testing carried out by ProLeisure every three months.

Similarly, since the lighting rigs have been employed at the Etihad, Roy and Lee have kept detailed records on the amount of light they give each area of the pitch, moving the rigs accordingly every two to three days. As Lee says, gone are the days of guessing the management of top level pitches. It has become much more of a science in recent years, backed up with sound cultural practices.

The second half of the game proved to be one-way traffic, with Man City piling on the pressure, and eventually getting an equaliser in the 65th minute. As is often the way with City, they scored a late w

inner two minutes before the final whistle. At least I was back in Lee's good books as his team had maintained their unbeaten home run.

As soon as the game had finished, we went back out onto the pitch to replace the divots, clean up with the pedestrian rotaries, and put all the lighting rigs back on. This took the team just over two hours and we managed to complete the work at 5.30pm. All that was left was to wash down the mowers and head home after what had been a long, but enjoyable day.

I would like to thank Roy and Lee for their hospitality and wish them well for the rest of the season.