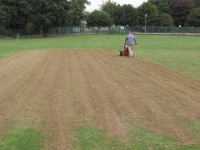 Well it's now one year on from when we took on our second ground, the former MOD facility, Mount Wise, and my how things have changed.

Last season the tracks were very variable in bounce, at times verging on being outright dangerous. When the square dried out there were canyons in it - to call them cracks doesn't really do them justice! We had some soil samples taken and, apart from pointing out the obvious 30mm of thatch, we found that there was 43% clay content - yes forty three percent! We've found out that, when originally built, the square was specified as an emergency helicopter landing pad for use with the communications centre which is located beneath parts of the outfield! We're guessing that this accounts for the unusually high clay content.

We were hoping to Koro off the top of the square at the end of the 2006 season but, due to planning problems, the lease that we needed in order to obtain the funding wasn't in place - and unfortunately, it still isn't (as of May 2007). So, we took the decision to hire in a linear aerator - interesting question being at what point does a scarifier become a linear aerator? We got in an Allen V star from Devon Garden Machinery (DGM) in Torquay, our local (ish) dealers. 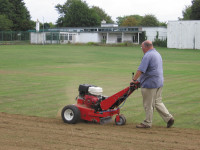 I expected to take a lot of dross out of the surface, but I wasn't quite prepared for just how much. I programmed the work for a Wednesday and Thursday which left us the weekend free for overseeding, top dressing and levelling. We had quite a few offers of assistance but, to be honest, scarifiying isn't really something that is suitable for more than two people (in my opinion).

One person walks behind the scarifier and another goes along picking up the arisings afterwards - it's only tiring because of the distance you walk. We did three complete passes over my square and took out some 20 to 25 cubic metres of dross. I would have liked to do another couple of passes, but setting the machine to go in 1 to 1.5 inches into the ground slowed the process down so much that there simply wasn't time to do any more.

The V Star needed to be moved to the first XI ground in order to get a couple of passes in there. DGM were very accommodating by leaving it until 8pm before collecting the machine.

I knew that we were going to take a lot out of the surface which was going to reek havoc with the levels so, after discussion with our Head Groundsman, Ken Wheaton, I took the decision to put quite a lot of loam back onto the square - some 18 bags per track. I achieved a complete winter aeration programme to help ameliorate this new loam into the surface.This was basically spiking every 2 weeks from the beginning of October through to the end of December.

We knew there was no way we would be able to get rid of all the thatch - that would take a few years using only scarification - so the aeration programme was even more important than normal. It was imperative that holes were put through any thatch that remained so that the new roots could get to some kind of depth.

The entire square was overseeded with Barenbrug Bar Extreme. Unfortunately, it didn't rain very much in September down here, so establishment was a bit slow. Having said that we had a fairly even coverage within 3 weeks and I was cutting the new grass by the first week in October. 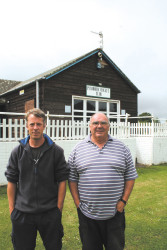 As we knew that the surface would either be replaced or Koro'd at some point, we decided that we didn't really want to spend the earth on top quality loam. Through Pitchcare I have made many good friends, one of whom is David Goodjohn at GSB loams. I had an indepth chat with David, going through our aims and what standard I needed to get the tracks to. He suggested that we gave the GSB Club loam a try. Motty tests showed it to be a good match, so we went with his suggestion. I have to say I've been very happy, so far, with the way it has performed.

The grass continued growing almost all winter - requiring two or three cuts per month. The only time when the square wasn't cut was the last couple of weeks of January and the first two weeks of February, and that was only because it was so wet.

We took cores out throughout the winter period to see how things were developing. By March roots were down to around four to five inches and, although the thatch layer was clearly visible on some tracks, it was nowhere near as bad as previously and the roots passed through it, holding the profile together across the potential break.

Preseason rolling started in March - basically as soon as the conditions were correct. I started with some quick passes with the square cutter - an Allett 30R (the wicket mower was away for maintenance) slowing it down as much I could. I completed a union jack pattern with the Allett and, as conditions seemed just about perfect, we went on with the main roller (unballasted). We started off with a union jack pattern at reasonable speed and then another pattern at slower speed.

Things were starting to look and feel quite nice. We ballasted up the roller for a final pattern at slow speed. I was very fortunate in that the captains of our 3rd and 4th teams helped out with the rolling. We kept a log on a white board in the garage so that everyone knew what the last direction rolled was and also how much time had been spent on rolling. When we finished I'd done some ten hours with the Allett and fourteen with the main roller, all done in optimum conditions.

So what did the cores look like? At the beginning of April we had roots down to around five inches. Perhaps not the density of root I would have liked but at least they were there. We also had visible compaction to four inches. How much compaction we'd achieved we didn't know, but the cores looked a lot better than they did at anytime during the 2006 season.

There was only one pre-season match scheduled in on my ground but the captains asked (which was nice) if they could also have a track to play 3rd XI against 4th XI. This was not a problem as the tracks were drying out nicely. Unfortunately, I was away on holiday when this match was played so I didn't actually get to see how the tracks performed. I prepared one track before leaving and Ken prepared the other. 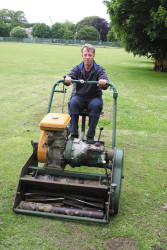 I did ring up from Tenerife to find out how they played (sad I know) and the reports I got completely stunned me. The bounce was consistent (I hoped this would be the case), the ball carried easily to the keeper (this I hoped for, but really didn't expect), and the pace was good. I was stunned at the pace - historically the square has always played low and slow so the idea that I had magically got some pace in it seemed somewhat unbelievable.

It turned out that, whilst I'd been on holiday there had also been a lot of sun on the tracks and they had dried out completely - quite amazing for April. I would like to claim some credit for it - purely because I believe that rolling in perfect conditions is what really makes a difference against the 'old' adage of rolling for hours and hours. What it did show was that if the tracks were dried out correctly then they would perform pretty well.

The main problem we've encountered is that weeds once again took hold on the square. We've had it sprayed, which has taken care of the dandelions and odd plantain, but shifting the daisies is proving a bit more difficult. We seem to have stopped the daisies from flowering, but they don't seem to be dying.
Now all I need is a bit less rain - three inches in the last two weeks of May is beyond a joke - and some sunshine so I can try and dry the tracks out once again.

This season we are providing cricket at the Mount Wise ground for the 3rd XI, 4th XI, two junior teams, Sunday league XI and our Ladies team. There should be over fifty games, depending on cup runs ... and the British weather!

Having personally played two games on the square it is difficult, even for me, to believe it is the same square that we took on last season. It really does go to show exactly what can be achieved by doing the most basic operations.