0 May maintenance tasks at Chapel Allerton

May maintenance tasks at Chapel Allerton 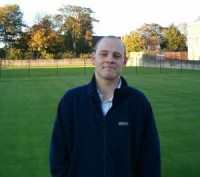 Inspect sward for debris prior to mowing, stones and twigs can damage and offset cylinder blade settings. Cutting should be undertaken with a well set sharp mower to avoid leaf damage as rye grass is notoriously difficult to cut cleanly. Poorly set mowers not only damage the leaf blade tissue, which in turn can increase plant stress and the likelihood of pathogenic (disease) attack, but often leads to poor presentation. Ribbing is a result of badly adjusted cylinders.

Cutting should now be increased to at least 3 times per week as soil temperatures are now increasing. The height of cut should now be that of the playing height (8 mm).

Pre-season rolling programme should have been undertaken correctly, gradually increasing the weight and frequency of rolling to consolidate your soil profile. However, rolling will only have a beneficial affect if completed during the right conditions. We have to judge carefully how much rolling we do, as over rolling or rolling in the wrong conditions (saturated soil) will promote severe compaction of the soil profile, which in turn will compromise root growth, drainage and active microbial populations.

Even and consistent rolling is best achieved after rain (rain guarantees even watering of the soil profile). Begin rolling as the ground begins to dry out. Increase the frequency of rolling 2-3 weeks before tournaments.

Start thinning out the sward, verticutting 1-2 times a week to reduce the build up of any lateral growth and thatch. This will help court firmness and increase ball speed and bounce. However, you should not verticut whilst the grass plant is in stress or during tournament play.

Marking of the courts should have already commenced and always mark out after cutting or heavy rain.

Irrigate if extremely dry conditions are prevalent to avoid dry patch and wilting, however try do not over-water and only irrigate to keep the plant alive.

Overseed any sparse areas as soil temperatures are now rising. Sow at double the normal rate (35g/m2) to discourage ryegrass crowning. Do not apply too heavily or damping off disease may be a problem. Germination sheets may be used to encourage germination.