Moles are causing mayhem at Smallfield Cricket Club's ground. According to members, the small mammals are regular visitors to the Plough Road club and nearby football pitch. 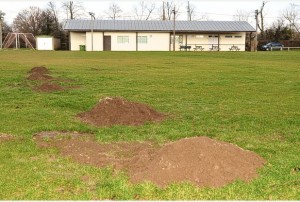 But this winter far more of the velvety furred friends have moved in and, for the first time in more than 35 years, they are burrowing under the cricket outfield.

Peter Marklew, club secretary and groundsman, told the Mirror: "I have played on the ground since 1979 and I have never seen it as bad as this. This is the worst mole infestation we have ever had.

"I don't know why they are doing it this year, normally we can control it."

He added: "We get moles quite regularly but it depends. If you get a wet winter you get lots because they tend to dig down to get the worms, but of course during summer they disappear because they can't get any worms."

Club members first noticed molehills before Christmas but were not initially alarmed.

However, as the cute critters dug up more and more of the outfield, the club has been forced to call in pest control company Prokill to catch them in traps.

Mr Marklew added: "They have dug huge molehills on part of the outfield but of course we also have got their tunnels underneath, which can collapse if you run over them.

"Obviously if you are on the football pitch this is even worse. There are some running along the back of the ground which we haven't tackled, it's just the ones coming onto the outfield that are a problem."

He continued: "The molehills are huge, you have got to see them to believe them. They are massive.

"And underneath that the earth has come from somewhere and if you are running over that and it collapses you are going to break a leg."

It is not the cricket season at the moment, but members are keen to have the animals removed before April, when they play their first match.

And, as each day goes by, mounds of earth appear closer to the village's football pitch.

An article on Understanding moles can also be read here Pitchcare.com