0 MAYOR- the force be with you

The Crawley Labour Club and Blind and Disabled Bowlers, were both formed in 1996 and played on a green provided by the local council at West Green. But there was never enough money left to provide the club with a pavilion so it never felt like home to either of the clubs.

Somehow they managed to carry on by paying to use a neighbouring social club's facilities for their meetings and entertaining visiting teams. But this was never a perfect scenario and, eventually, the Labour Club disbanded due to the lack of facilities.

A prominent local councillor, Ben Clay, took up the quest for a permanent base for the clubs as he recognised their importance to the local community. Ben arranged a meeting in the autumn of 2004 between club officers and officials of Crawley Borough Council.

This resulted in an agreement allowing the bowlers to take over the upkeep of the green and, in return, a dedicated pavilion would be provided by the council. The annual savings on the maintenance of the green alone would mean that the Council, and its ratepayers, would not only get their money back for the new pavilion but would also realise a small profit by releasing council workers to undertake other tasks.

The bowlers at West Green invited a larger club in Crawley, the Downsman Bowls Club, to merge with the remaining Labour Club members and the Blind Bowlers so that they would have enough personnel to honour the agreement.

The Downsman was formed in 1978 by regulars at the Downsman pub in Crawley's Southgate neighbourhood where their Vice President, Dennis McCready, used to be the publican. Meeting after meeting ensued and eventually an agreement was reached to provide a thirty year lease to the newly formed club who took the name of the oldest of the three, The Downsman. 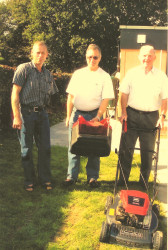 A prefabricated pavilion was erected in a very short time, and this was officially opened by the Mayor, Councillor Ben Clay, in May 2006. Just reward for his very hard work on behalf of the bowlers of Crawley.

The Downsman Bowls Club now consists of mainly sighted and able bodied people but, importantly, there is a very keen and enthusiastic group of Blind and Disabled Bowlers. They are incredible people. They play to the same rules as everyone else, but need to have a string down the middle of the rink to give them an idea of the middle line and where they place their hand.

They also need to know how far the jack is away from them ie 25 yards - 30 yards. A sighted player is at each end with a walkie talkie telling them where their wood has finished. They play other blind bowlers but they also play with the main club and enter competitions.

Sighted players sometimes play in their team if they are short of players. It is an inspiration to watch and listen to the banter going on between them. They have beaten sighted teams and, as a group, they get more confident all the time. The club are convinced that having a permanent home has been a huge factor.

Paul and Valerie Smith, who run the section for them, are in contact with other organisations looking for more players. The main problem is to convince them they can play even when they can't see.

Recently the club were given a donation of a wheelbarrow, various hand and electric garden tools and a rotary mower by the local B&Q on their Good Neighbourhood grant scheme. As is the way with most things B&Q, the rotary mower had to be assembled. Enter Barry Scripps, a disabled member with one arm and one leg. "No problem, me and the lads will fix it". The other 'lads' were Ray Wood, who has very little sight, and Frank Meeten who has peripheral sight and needs to use an eye glass to be able to see anything.

The mower was up and running in no time. They then decided to test out their new machine by cutting the grass surrounds. It was a moving sight to see Barry walking beside them guiding them on a straight line. When they were confident with the machine they were left to mow the rest on their own. The trio are now on the club list as mowers, edgers and hedge cutters. What an achievement. Frank and Ray have never before been able to do any work in the club. The difference it has made to their self esteem is amazing. They feel they are now contributing something back to the club.

And so to Bill Ledger, a playing member of the club. Bill has taken on the challenge of learning the art of greenkeeping. He has already signed up for the EBA Level 3 Bowls Greenkeeping Course at Cranleigh and has been helped greatly by existing greenkeepers, often on-line at Pitchcare, who have been very supportive in their advice.

Bill has a band of eighteen members affectionately known as 'The Green Team', who work willingly to help him. Bill is known as 'the Greenkeeper'. "Someone has to take the blame" he says. The commitment and enthusiasm of The Green Team gives him every reason to be thankful for their unstinting support. He is confident that the green will become one of the best in the area.

When it was taken over by the club in July it was in very poor condition, but, due to the non stop care it has received since then, it is actually looking like a green. Visiting clubs have been very complimentary. The winter work is just about to begin, a programme of work is in place. A demo by Keith Kensett, the 'Graden Man' took place in early October and this gave Bill and his team a flying start. 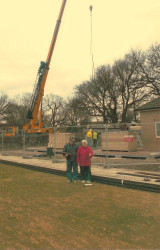 Fund Raising for the club is ongoing. The money raised last year has been spent on furnishing the pavilion and purchasing equipment for the green. This included an Allett C24 with cassette system and various Sisis equipment.

They are now looking to raise money to buy a special wheelchair to allow disabled bowlers access to the green. The provision of fertiliser, materials, seed etc. has been costed and, whilst good value for money, is an expensive business for a voluntary club. The club are looking for sponsors to help with the cost of maintenance of the green and pavilion.

So much has happened to this club in such a short time and all the workers should be congratulated. The Club and Green are fast becoming an icon for others to follow.

The club operates on an all year round basis, providing Short Mat Bowls and many other social activities for its members.

Chairman Paul Smith said "We are looking forward to the future with great confidence. We are saving the ratepayers of Crawley a great deal of money and, because our green is looked after by our bowlers, we get the playing surface that we want and not one that some well meaning council official thinks we ought to have. We are providing a matrix for all sports clubs in the town. The burden on Council Tax is reduced and players get the standard of pitches that they want. Everyone wins."