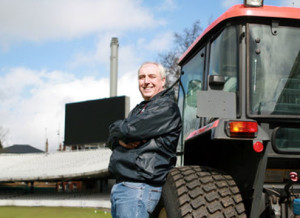 Mick, who is the longest-serving member of MCC staff, has worked at the Home of Cricket since 1969, taking charge of the groundstaff in 1985.

He rang the bell, situated outside the Bowlers' Bar of the Lord's Pavilion, to signify the imminent start of play of the fifty-over match celebrating the 200th anniversary of the current ground.

The match, which saw Sachin Tendulkar's MCC side take on a Rest of the World XI captained by Shane Warne, was played in front of a full house at Lord's, and also featured star names such as Adam Gilchrist, Brian Lara, Rahul Dravid and Muttiah Muralitharan.

Mick was selected to ring the bell to reward his years of service to MCC, and to represent the other staff members of the Club. In his 45 years working at Lord's, he has prepared pitches for 73 Test matches and 127 ODIs, including all seven World Cup Finals played at the ground.

MCC Chief Executive Derek Brewer said: "I was delighted to be able to invite Mick to ring the five-minute bell before such a prestigious game. His years of service providing outstanding pitches at Lord's are unrivalled, setting the standard for groundsmen the world over.

"By ringing the bell Mick was representing all MCC staff whose dedication and hard-work behind the scenes is valued so highly, and continues to make this a world-class venue."

The ringing of the five-minute bell at Lord's by an international cricketer, administrator or well-known enthusiast of the sport is a recent tradition brought in by former MCC Chief Executive Keith Bradshaw in 2007.

Shane Warne had his hand broken by a Brett Lee beamer as the MCC beat the Rest of the World by seven wickets.

Rest of the World captain Warne was hit by his former Australia team-mate in the final over of his side's 293-7, in which India's Yuvraj Singh struck 132.

Sachin Tendulkar made 44 and Brian Lara 23 before Finch finished the match with a six with 25 balls to spare.