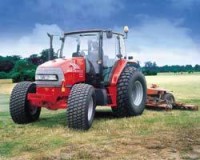 The Perkins 1104C-44 four-cylinder engine is one of a new family of power units developed to meet latest exhaust emissions standards and raise performance levels. Last year, McCormick selected the six-cylinder version as the launch engine for the 85kW / 115hp and 98kW / 132hp MC Power6 tractors.

The larger volume 4.4-litre engine has been tuned to deliver the same maximum power outputs as its predecessor but with 'constant power' between 2000 and 2200rpm. In addition, the 1104C-44 delivers more torque lower down the rev range to give the tractors livelier performance under load.

Operators will also appreciate the cut in running costs that come from lower fuel and oil consumption. A new combustion chamber shape and cross-flow cylinder head design help improve fuel economy, while precision plateau cylinder bore honing and service intervals extended from 300 to 500 hours dramatically cut the amount of lubricant and number of filters consumed over the life of the engine.

Engineers also paid great attention to noise quality and output when designing the new engine. In combination with a roomy cab renowned for its noise suppression, this makes the latest McCormick CX and MC tractors exceptionally quiet and comfortable for long hours in the driving seat, whether the standard height Deluxe or Low Profile designs are chosen.

The CX tractors are supplied as standard with McCormick's new XtraShift transmission, which provides three powershift speeds in each gear plus powershuttle. There is no duplication of speeds from one gear to another so drivers have a choice of 24 speeds in forward and reverse, or 36 speeds in both directions when the factory-fitted creep version is fitted.

Hydraulic services amount to a 60-litre/min open centre gear pump, plus a 30 -litre/min pump for steering and other ancillary circuits. Electronic control of the rear three-point linkage is standard.

Both mechanical and electronic versions of the engine are a good match for the McCormick MC's four-speed powershift transmission that in combination with four ranges provides 16 speeds forward, 12 in reverse or 32 forward, 24 reverse with the creep option added.

In addition to heavier duty front and rear axles than on the CX, the MC four-cylinder tractors also feature a closed centre hydraulic system with variable output pump delivering oil at up to 109 litre/min in response to pressure and flow demand.