0 Measor receives both brickbats and bouquets 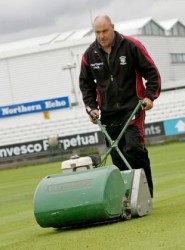 Durham groundsman David Measor saw the Riverside pitch come in for criticism last week from Kent. Despite the England and Wales Cricket Board taking no action Cricket Writer Tim Wellock discovers a man battling constant suspicions about the square at Chester-le-Street.

Even groundsmen have to cope with those twin impostors, triumph and disaster.

When England amassed 307 for five in June's one-day international against New Zealand at Riverside the unsung hero was David Measor.

But the last week has reminded him that for every silver lining there's a cloud not far behind.

Measor has been Durham's head groundsman since the man he understudied, Tom Flintoft, retired in 1999 with some teething problems still not fully resolved and another major one yet to surface.

That was what's known as a root break, and in Riverside's case the grass roots throughout the square were breaking an inch and a half below the surface.

That was the problem when England played New Zealand in a one-day international in 2004, and although they ought to have seen the need for caution they batted like millionaires and were all out for 101.

So for the pitches to have improved to the extent that four years later England could top 300 in 50 overs is a matter of justifiable pride for Measor. But here he is a few weeks later feeling like King Canute.

As he battles against rising water levels ahead of next Wednesday's Twenty20 international between England and South Africa he also has the words of Kent skipper Rob Key ringing in his ears.

Although Key said he didn't believe a poor pitch had deliberately been prepared, his scathing criticisms following his side's two-day championship defeat did not go down well.

"We are always trying to produce the best possible pitches and when you have put so much hard work in it hurts when people say things like that," said Measor.

"Sometimes I've had my wife up in the middle of the night helping me to drag extra covers on when rain has arrived which hasn't been forecast.

"We thought we had a dry pitch for that match, but with the moisture around it seemed to sit in the grass.

Sometimes in the same sort of weather it can be okay, but there are still times when a pitch can surprise me."

There has been a suspicion at Durham that reservations about their pitches have counted against them in the allocation of international fixtures.

Their only Tests to date have been against Zimbabwe, Bangladesh and the West Indies, with none allocated this year and Cardiff preferred for next year's Ashes series, when Riverside will host what is likely to be Sri Lanka's second string.

So Measor is naturally anxious to provide further proof to the powers-that-be that they need have no fears about his square.

The weather is not helping, however, and with more rain forecast for the rest of this week, he and his assistants, Darren Gibson, Mark Patterson and Andrew McKay, will be praying for three fine days leading up to next Wednesday.

"I still get nervous before big games," said the man who began learning his trade straight from school at Seaton Carew Cricket Club in 1978. "If I didn't it would mean I didn't care.

"We start work at 7am, or even earlier depending on the weather, and I think we have improved the pitches immensely. They have much more even bounce and good pace.

"Moisture content is critical, and over the years we have learnt to manage it. If the river falls it draws moisture out and we have to water constantly.

In a wet spell we get a high water table and we can't do anything about that. All we can do is keep the surface water off."

The root break affected pitches for two or three years before he solved it, re-laying four strips to a depth of five inches and taking the top off the others.

"The pitches were slow and after a game the grass was dead," he said. "We struggled with uneven grass cover, but we seem to have sorted it out."

Measor moved from Seaton Carew to Hartlepool CC prior to the 1991 season, and four years later he arrived at Riverside in its first season as a first-class venue.

Flintoft, who had transformed the Acklam Park ground at Middlesbrough, had overseen Riverside's development from the outset.

Believing the soil at Wolviston to be perfect for cricket, he accepted a donation from Sir John Hall of sufficient top soil from Wynyard Hall to create the Riverside square.

With the benefit of hindsight, Measor thinks the choice of soil might have been a mistake, saying: "We always had pacy pitches, but in the early years we had a lot of trouble with uneven bounce. No matter what we tried we couldn't sort that out."

Other than from Rob Key, however, there have been few complaints in recent seasons and while Riverside pitches are rarely featherbeds they generally provide the main objective of an interesting and balanced contest between bat and ball.