by Matthew Campelli
in Football, Industry News, and Renovations & New Builds
on 06 Jan 2017 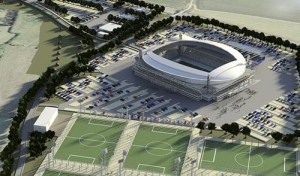 The Manchester-based studio has overseen the design of the 14,000-capacity stadium and surrounding development, which includes an ice rink, leisure facilities and housing.

Extreme Leisure, the sports brand founded by entrepreneur Alistair Gosling, is partnering with the League Two football club on the £55m project.

A rendering released by Extreme Leisure shows what appears to be several community or training football pitches adjacent to the stadium, but Extreme Leisure declined to comment on the exact nature of the leisure facilities until 18 January 2017, when North East Lincolnshire Council presides over a report about the development.

Full planning permission is yet to be submitted, according to a council spokesperson.

A section of the local community in Grimsby have been critical of the decision to propose the stadium for the Peaks Parkway area of the town - south of the town centre - but, in an interview with Sports Management earlier this year, Gosling said he was certain the venue would be "at the heart of the community".

"What we're about is creating destinations - it's not about building stadiums in the middle of nowhere to use occasionally," he said.

When the project was first unveiled in September, Gosling revealed that Extreme had "secured all the funding" for it.

North East Lincolnshire Council will put some funding towards the development, although a spokesperson told Sports Management that the level of investment was yet to be determined.