Ian Morris has worked at the College for thirty years, having joined as a trainee groundsman way back in 1977. He takes up the story...

I now find myself, finally, in the coveted role of Head Groundsman, a position I value and enjoy immensely.

My long association with Ellesmere College has enabled me to have a better appreciation of its history and culture whilst, at the same time, getting to know my own patch really well. Having experienced a number of challenging seasons I now have a greater understanding of my grounds and pitches and how they are likely to perform at certain times of the year.

I was lucky that, during my early years at the college, the Head Groundsman, Mr. Ramish Sethi, believed passionately in training as being the key to success. He encouraged me to attend Reaseheath College and gain the appropriate qualifications. These included NEBSS Certificate, IOG NTC, City and Guilds Sportsturf and Amenity Horticulture. 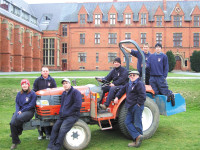 Now I am in charge and, with the support of our Operations Manager, I continue with this approach ensuring all staff are trained and given opportunities to gain relevant qualifications.

We are constantly trying to improve the facilities - our reputation is based on providing high standard surfaces at all times. We have short, medium and long term goals to improve various facilities in and around the College.

I am still a very much a hands on Head Groundsman having, and wanting, to help out with many of the sports pitch maintenance operations.
Currently we have a team of five, complemented by some seasonal staff:

Like many other independent schools and colleges, we centre our operations around the sporting calendar and divide the maintenance requirements into three term times.

The boys hockey is played on our grass hockey pitches which are maintained at a cutting height of 18 mm using Allett 36" mowers. We brush/drag matt, mow and mark for every game. We also regularly spike the hockey pitches using a SISIS 4" solid tine spiker towed by our 21hp Kioti compact tractor. Goalmouths and worn areas are top dressed with Bathgate M60 using a Trilo spreader.

We now also have to maintain a training area that is used five times a week by TNS, a Welsh football club, and recent winners of the Football Association Wales Cup.

A lot of soccer and rugby sevens tournaments are played in this term which demands a lot of pitches to be prepared and marked. We utilise portable goal posts for the soccer, allowing us to rotate the pitches to reduce wear. Again, all pitches are drag brushed, spiked, mown and marked for each game.
We also have to begin preparing our cricket tables and outfields ready for the coming season. A programme of rolling and fertilising is carried out on winter sports areas that double up as cricket outfields. An application of 12.6.6 fertiliser is applied to stimulate and aid early spring growth.

This year I hired in contractors to overseed our outfields that had suffered from the previous summer's hot weather; overseeding with Advanta Action Replay at a rate of nine bags per pitch.

Rolling of our squares and net areas began in early March using the Allett 36" mowers before gradually increasing the weight using ballast and then finally getting out our dedicated Autoroller cricket roller.

The college closes for a three-week Easter holiday break, and we have to use this time to prepare and change over the pitches to accommodate our Summer Term.

We have three cricket squares, two are 14 strip squares and the other provides 6 strips. We also have 15 practice wickets. All are maintained identically.
The squares are kept at a cutting height of 13mm using Dennis 34" mowers. We operate a 10-day wicket preparation regime using Lloyds Paladins for the final surface cutting.

I usually have a pre-season plan detailing all the fixture lists. This helps me keep on schedule. However, it invariably gets overtaken by additional fixtures due to the school doing well in cup games. Also, the old boys team, Old Ellesmerian, also use the grounds for fixtures.

A full 8 lane grass athletic track and a hurdle track are prepared and marked on a weekly basis. The tracks are mown at least twice a week with our Allett mowers. The remainder of the school fields are cut using our Lloyds gang mowers, also on a twice-weekly cycle.

The college also has a nine-hole par three golf course within the grounds. It is maintained all year round but is kept closed between January-April.
Summer Holiday Period: August -September.

The first priority is to renovate the cricket squares. It is imperative to get the job done quickly to make good use of the high soil temperatures to ensure rapid germination of seed. We scarify in several directions, spike if moist enough, and topdress with Boughton Loam using the Trilo spreader, and then overseed.

Not all of the square is renovated. We still require a number of strips to conclude the Old Ellesmerian fixtures that usually finish in September.

The college also run a number of events and summer sports clubs, such as camping and caravan rallies, that bring in much needed income.

Accommodating these events often creates more work for my staff, especially after the summer campers have gone, when we have to spend a lot of time finding tent pegs left in the ground. Not only can they be dangerous but they can often damage our mowing cylinders.

The rest of the summer holiday period is spent with the ongoing mowing regimes and gardening works along with sorting out the goal posts for the oncoming Michaelmas term.

The rugby and football pitches are roller mown with an 8 foot wide. In previous years the length of sward on these winter pitches was kept at between 100-125mm. However, with more soccer being played at the college, we gradually began to lower the height of cut on all our pitches to 50mm, which was then cut to 25mm for soccer after the Christmas holidays.

Hockey pitches are cut, rolled and marked using the Alletts and Kombis.

We apply an autumn feed to take the pitches through the winter months.

The college has strong links with Shropshire Wildlife Trust and a recent co-project has been the creation of habitats for hedgehogs within the grounds. Another development at the school, supported by the groundstaff, has been the formation of a pupil 'Green Team' who have instigated tree planting, wild-flower areas and hardwood tree planting. This has given the groundstaff the opportunity to interface and share their expertise with pupils of varying ages.

Other tasks that the team undertake are centred around annual hedging and pruning works, as well as any unforeseen tasks. And finally, during the winter months, we look to undertake any minor refurbishment works or small constructions / drainage work.

We have a number of artificial tennis courts and all weather areas that we also have to maintain.

The college cannot afford to stand still and we all need to work towards improving the quality of our playing surfaces. The investment in quality machinery, materials and the ongoing training of staff are key elements that we need to address to ensure the college continues to maintain the fine reputation it has developed for its sports provision during the last 123 years.