0 Melbourne - a course dying of thirst 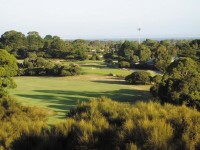 The focus is on just one specific aspect of the weather - the rain - and, more particularly, the absence of it.

Many areas of Australia have been suffering from near drought conditions for most of the last decade. Brisbane, on the east coast, is the worst hit, with current dam levels at 20% of capacity, whilst some of the other major cities, such as Melbourne, Perth and Canberra, are faring marginally better at 40% capacity. Bear in mind that these figure were issued after the main rain-producing months of winter, and summer is just about to begin, so the situation is only likely to worsen.

This was the key issue on my mind when I called in to see Jim Porter, Superintendent at Royal Melbourne Golf Club. As if to emphasise the point, the weather presenter on the car radio announced that today's high was going to be 36 degrees centigrade (97 degrees Fahrenheit). Today was 20th November, still only springtime down under - the hotter summer months of December, January and February are still ahead!

Jim is in his eighteenth year at Royal Melbourne, and he accepts that the water shortage issue is his major concern for the future. However, that has not always been the case. In fact, Jim is the only Superintendent at the course to have an automatic sprinkler system at his disposal. "The current system was

commissioned just after I started in 1989," he said. "Work on it had begun a couple of years earlier, and it was put in to meet the growing demand for summer golf. We never used to have summer golf here, but now it's our main playing season."

"Interestingly," he continued, "we then went through a period in the early nineties when our rainfalls were quite extreme, and particularly the summer rainfalls. It was quite tropical, we were getting an inch of rain, and sometimes two inches, in a matter of hours. The course is on sand, so there was little in the way of a drainage system, and what was in place was extremely old."

"As a result, it couldn't cope, and we had extensive flooding in some areas, and the water was lying on the surface for two or three days. The floods had quite an impact on the turf quality, particularly on the fairways."

Summer golf has made a massive difference to the way Jim and his team (25 full time and 3 part time staff) prepare the course and deal with that most precious of resources - water. Bore water has always been available, but there is a growing dependence on this source, which is of great concern to Jim, as he explained. "Traditionally, pre the irrigation system, the club didn't water the course much at all, apart from the greens, and they were done with a shandy of bore water and town water. However, those were the days when we were irrigating around two hectares of golf course, but now, because of summer play, we are trying to irrigate fifty hectares!"

"Up until three or four years ago," Jim continued, "75% of our water usage was potable water and 25% bore water; now we are 70% bore water. The yield from the bores hasn't changed, we've just had had less potable water to use. The problem, however, with bore water, particularly with the drought conditions, the yields have gone down (about 50% on last year), salt levels have gone up and, because you are using a lot more of the bore water on your greens, all those issues such as bicarbonate and sodium levels in the soils get transferred on to the greens."

Currently, stage 3A water restrictions are in force in Melbourne, and have been since January 2006. What this means is that the club are able have town water available just four nights a week and have to use the bore water the other nights, if needed. All the water allocation goes on the prioritised surfaces - greens are the highest priority, followed by the tees (which receive only bore water). I asked Jim what his immediate concerns were.

"Our fairways," he responded. "We have a two grass system on the fairways - we are probably the only golf course left on sand belt that does that - common couch and winter grass. Last October the winter grass died out early because of the drought; the couch was there but, because we had only 2mm of rain in October and nothing afterwards, it just went backwards. In March/April, when we would normally have 100% couch cover, we were lucky to have ten or twenty percent. The fairways were garbage."

"I don't mind us being dry," he continued, "but we do need a little bit of water to keep things ticking along. We don't produce a green golf course, and we never have; we are not here to have perfect green fairways, that is not the philosophy of our place. But, in times of drought, you still need some water to try and keep that balance, to keep the plant surviving. At the moment it's not surviving."

As a consequence, during this year's peak summer months, the club will be transporting in a megalitre of class A recycled water per week at a cost of A$16,000(£7,000) per megalitre. "The aim is to try and keep the fairways alive," explained Jim. "Over the summer it's going to cost us A$200,000, but it's a lot cheaper than replanting all your fairways!"

However, there is a possibility that things may get worse. After last year's very dry summer the worry is this one could be the same. Potentially, the area could go to stage 4 restrictions and, for the club, that means no town water at all.

"I would have to survive on my bore water only," said Jim. "But, there isn't enough to sustain demand. The bores produce around 300,000 litres per day, and the greens alone use 280,000 litres per night"

An apparently bleak situation for a course that has been regularly voted one of the top ten in the world. So, does Jim have any plans in place to address the issue?

"Looking forward, we will reinvestigate some of the bores," he said. "We've been drilling since the fifties and sixties, and we're still drilling. To drill a bore can cost anything between A$20k and A$80k and, to develop, it can cost the same amount again. We had a few bores where the running costs outweighed the yield, but now that we are getting less town water, we are going to look at some of them again."

"However, our major project," continued Jim, "is a 37 megalitre capacity dam for storm water. Two years ago we had a survey of the amount of storm water running through the course and coming from the surrounding urban areas. It was estimated that we could get 90 megalitres per year, if the authorities allowed us to do it. Our current annual usage on the course is 120 megalitres so, if the rainfall is adequate and we get 90 megalitres of storm water, together with our bore water we would be fairly self sufficient."

The necessary approvals were obtained, and work on the project began in earnest.

The storm water will be collected in an underground tank on the course and pumped 1.8km to the dam. The project is costing A$2m (£900k) and is scheduled to be completed by March 2008, in plenty of time for the next Australian summer.

Understandably, Jim sounded a very relieved man. "Hopefully, we should be able to collect at least 37 megalitres of water next winter, which will give us two months supply if it doesn't rain during the summer. And, who knows, I may even have the luxury of putting some water on the fairways!"