The Boxing Day test is over for another year and the Ashes are heading back to England, but what did you make of the action at the famous MCG? 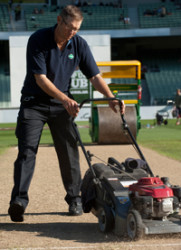 Over 220,000 descended on the MCG in the first three days alone to watch Australia get an absolute pasting from the old foe. If the sun was out and the match was close, who knows what the final crowd numbers might have been. That first day watching Australia being bowled out for under 100 was something else; the barmy army made our most famous stadium sound like it was located in England! The official crowd ended up being a huge 240,116 and a good quarter at least were English.

Cameron Hodgkins' pitch saw 869 runs in a tad over three days and produced 29 wickets. Indeed, the match was so one sided it's hard to judge how the pitch played. England dominated with the bat and bowl they managed to extract bounce and swing from the pitch early and again had the ball swinging both ways on day three. Australia on the other hand did neither, and struggled to make the ball do much at all. 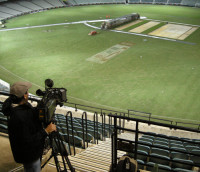 I think it's only fair to judge the pitch on England's bowlers as they made our own look very substandard.
All the fuss over the new pitch being dropped in before the test was irrelevant, you might even have thought they switched pitches between Australia batting and bowling, as was the gulf in class it looked like we were playing on another pitch!

Much intrigue surrounded the nature of the drop-in pitch that was used for the test. Hodgkins had reportedly been asked to abandon his initial first choice in favour of a grassier and much livelier surface, but Cam insisted that was not the case and said: "No, not at all. A few people would like to believe that was the situation, but the last time I spoke to someone from Cricket Australia was in the middle of winter."

He added: "It's entirely a personal thing and it was something I did two weeks ago, so it wasn't on the spur of anything that happened in th

e last week or so from the WACA test".

Cameron Hodgkins knew his pitch "We're quite slow on the first day normally and it probably causes the most difficulty for batsmen who want to get on with it, so patience is normally a fairly key ingredient here. If you don't have that then you can be four or five down early on and the game over." We ended up being more than four or five down though Cam!

The outfield in typical MCG fashion looked fantastic no matter where you were sitting. The wet Melbourne summer left it a little slower than the other grounds but it was still top quality.

This test has easily been the hardest to write about with it being England's biggest win in Australia for almost a century. You have to go all the way back in February 1912 when they won by an innings and 225, also in Melbourne. Australia also have to go back 25 years for the last time they lost two Tests in the same series by an innings which was at Edgbaston and the oval. Under fire, Ricky Pointing is also the first captain to see three unsuccessful Ashes campaigns since Billy Murdoch in the late 19th century.

So, not much good news coming from the big test at the G, still it was a fantastic pitch for one team and the ground looked amazing for all 240,000 who came through the gates.

Rob's Ratings:
A 10/10 pitch for the English! Shame we looked awful with the bat and ball. Outfield looked a little slow towards the boundary but the guys had it stripped up a treat.
Pitch 8/10
Outfield 9/10
How would you rate the Boxing Day test in Melbourne?

Although the Ashes are heading back to England, the series can still be drawn if Australia can get up at Tom Parker's SCG. We head to Sydney on Monday Jan 3rd for hopefully five days of tight cricket at the famous ground.

Best of luck to Tom and his team and I'll be back with my last wrap up in 2011! Happy New Year.