The life, work and inventive genius of tractor pioneer, Harry Ferguson, have been officially recognised in the creation of a memorial garden less than 50 metres from the farmhouse in which he was born and grew up in County Down, Northern Ireland.

Formally opened on 16 August by Harry Ferguson's grand-daughter, Mrs Sally Fleming, the memorial garden has as its centrepiece a striking life-sized bronze sculpture of Harry Ferguson leaning on a farm gate with, appropriately, spanner in hand.

The opening of the garden marked the culmination of almost 10 years planning and fund-raising by the Harry Ferguson Celebration Committee, a group of Ferguson and Massey Ferguson tractor enthusiasts who wanted to establish a fitting memorial to the inventor of the hydraulic three-point linkage which first saw light in 1933 on the Ferguson Black tractor, now housed in London's Science Museum.

The various elements which came together successfully in that tractor led to the introduction of the Ferguson System of farm mechanisation which combined tractor and implement as a single entity, working the land in harmony rather than as separate parts pulling against each other as had been the case prior to Harry Ferguson's invention of his hydraulic three-point linkage.

The Ferguson System transformed agricultural mechanisation, helping achieve Harry Ferguson's goal of making life easier and better for the world's farmers. In doing so, he furthered the security of global food supplies by enabling a small proportion of the world's population to more effectively feed the rest.

Although incorporated initially into tractors built by David Brown and later by Ford, the original Ferguson hydraulic three-point linkage is best known for helping to make the Ferguson TE20 tractor - the "little grey Fergie" - a best-seller around the world, a position maintained over the past 50 years by its successors bearing the Massey Ferguson name. 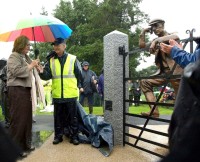 Formed in 1958 following the merger of Harry Ferguson Ltd with Canadian harvesting specialist, Massey-Harris, Massey Ferguson has continued to pursue over the past half century the qualities of leadership, vision and innovation laid down by its forefathers.

The global importance of Harry Ferguson's legacy was highlighted at the official garden opening by Jeremy Burgess, Massey Ferguson's director of sales and marketing for Africa and the Middle East and proud owner of a Ferguson TE20 tractor.

"Massey Ferguson's distinguished heritage of the past 50 years owes a great deal to the inventive genius, passion and commitment of Harry Ferguson," he said. "His development of an integrated mechanisation system combining tractor and implement changed forever the nature of global food production. The fact that Massey Ferguson is currently active in 140 different countries reveals the true legacy of Harry Ferguson who was determined to improve the lot of those working on the land worldwide.

"In helping sponsor the Harry Ferguson Memorial Garden, Massey Ferguson is delighted to acknowledge that legacy and the high values of quality, reliability and pride laid down by Harry Ferguson and pursued to this day in every aspect of our engineering, sales and customer support operations."