by Charmian Robinson
in Industry News
on 20 Mar 2009 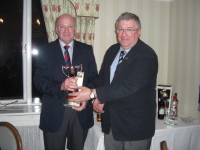 Forty one players took part in the competition at Wilmslow Golf Club, and Peter won with a score of 39, which is no mean feat on an Open Championship qualifying course.

A keen and able golfer, Bert Cross had a long association with BIGGA, serving as Northern Regional Chairman and on the National Board of Management until as recently as last year. He died in the same year he was elected President of the North West Section after being its secretary for 30 years, and it is in his honour that the Presidents Cup has been re-named the Bert Cross Memorial Trophy, sponsored by Campey Turfcare Systems.

"We welcome this opportunity to be able to celebrate Bert's life in this small way," said Richard "in memory of a valued and respected colleague and a much loved individual who devoted a huge effort to his charitable interests as well as contributing significantly to the golfing industry."

Bert and wife Marie were dedicated to helping over 270 orphans, all living with either AIDS or HIV, at the Kasisi Orphanage in Zambia, making regular trips to deliver clothes and much needed medical supplies. Marie has since completed a particularly poignant trip, where she spread some of Bert's ashes at the orphanage.

Chris Sheehan, current North West Section Secretary said: "We'd like to thank both Richard Campey and Wilmslow Golf Club who hosted the competition. It's our intention is to hold this event every year and a suggestion has been put forward that we can use it to continue fundraising for the Kasisi Orphanage in the future. The competition will be open to all greenkeepers, anyone who knew Bert and who enjoys playing golf."

Sometimes fact can be stranger than fiction. The day before the competition was played, Chris Sheehan received an email out of the blue from renowned golf photographer Alan Birch. He had been sorting archive pics and had stumbled across one which he thought might interest him. It was a picture taken at Carnoustie in 1989 of Chris Sheehan, Billy Merritt (NW Section Treasurer), Steve Oultram (Course Manager of Wilmslow GC) and Bert Cross. They were all at Carnoustie for the Open offering tournament support.

The timing was uncanny but very apt. Chris took the picture to Wilmslow the next day to show the others who were all going to be playing on the day. "I'm not usually superstitious" said Chris "but it did make the hairs on the back of my neck stand up and we all agreed that Bert was at the event in spirit if not in body."

For further information about participating in next year's event, please contact: jsheehan@blueyonder.co.uk