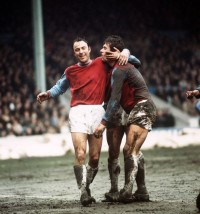 The modern player does not know how lucky he is with their snooker-table perfect pitches, writes The People columnist

Jimmy Greaves Football player for West Ham United stand with his arm around the shoulder of Geoff Hurst covered in mud Days gone by:

We used to swear blind that Derby's groundsman would wander out to inspect the old Baseball Ground pitch if there had been torrential rain in the build-up to a match ... and then decide to water it properly.

So I couldn't help chuckling to myself as I watched the sorry, soggy mess unfold in Warsaw.

The referee was quite right to call off the game on Tuesday between Poland and England, of course, but I'd have loved to see it go ahead just for the spectacle, and I'm sure there were many others thinking the same.

Our biggest enemy used to be fog, but we also had to play on some real mudheaps and ice rinks as well, and there's no doubt the pitches had a massive influence on the way the game was played and how the league table eventually shaped up.

I even knew of players being picked for a particular pitch and the weather, rather than their ability.

If we'd had a downpour a manager would sometimes turn to a player who could hoof it a long way rather than someone more likely to play pretty little 10-yard passes.

If the pitch was frozen, you'd probably play someone who was a bit lighter on their feet. I remember playing for Chelsea in Bilbao and it was a quagmire.

No one could move the ball more than 10, 15 yards, either, except for one occasion when someone knocked it to Johnny Sillett, our left-back, who hit it clean on the volley. It was the best goal he ever scored but, unfortunately, it was an own goal.

Our keeper Reg Matthews had got stuck in the mud and the ball landed over the line. We lost 1-0.

So it's with a little bit of humour for me when I see players looking at pitches like Tuesday's and holding their hands up as if to say, 'What's happened?' I remember going with Tottenham to Man City in the 60s when they had Mike Summerbee, Francis Lee and Colin Bell. We scored first and should have come off straight away the rain was that bad, but we stayed on and lost 4-1.

Four years later, I went to Maine Road with West Ham and, on a mudheap, we won 5-1.

The modern footballer doesn't experience this type of variation. That's probably why the game was more physical then, because there were times when it couldn't not be.

Everyone was slipping and sliding and the slide tackle was very much the order of the day.

I have to say I much prefer it now, because you know what you're playing against.

Every match we played, home or away, we'd go and see what the pitch was like before the game to decide what boots to wear: long studs, short studs or rubber studs.

It was even the same at Wembley. Nowadays, they go out to warm up on the pitch, whereas we were always chased off it. We'd go out to have a look to see what boots we should wear and, when the groundsman wasn't looking, we'd sneak on for a closer inspection.

If he caught you, you'd hear, 'Get off that f****** pitch!'. You were frightened even to walk on it - can you imagine the groundsman shouting that at the players today?

At Tottenham, we had a side that should be credited with being one of the best footballing teams there has been, but I'll never know how.

All week we had this thick tarpaulin across the pitch and there was a stream running under the ground as well. It has been diverted now, but it was never going to be right when it rained.

Every pitch used to have its own little peculiarities. But now, whether it's Anfield, Old Trafford or the Emirates, they're all pretty much the same - snooker-table perfect.

Money AND good pitches - the modern-day player doesn't know how lucky he is.