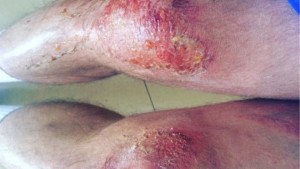 A Welsh rugby coach has posted photographs on social media of burns his players received playing on an artificial pitch.

Merthyr were playing RGC 1404 in the National Cup semi-final on Sunday.

A spokesman for Pontypridd RFC said the club had no comment to make.

Merthyr RFC posted photos of the injuries on Twitter.

Mr Jarvis said: "The pitch was a little bit dry on the weekend and the boys came away with some nasty burns.

"With the weather being dry, they do say you need to water the pitch."

He said the players would be assessed later to see if they are fit to play their fixture against Pontypridd on Saturday.

Mr Jarvis said there had not been any problems when they played there previously and he did not think it would put players off using the pitch again. 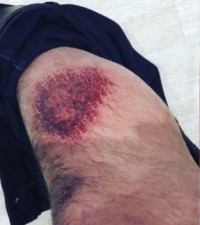 "3G and 4G pitches are the way forward for me," he said. "We've played all our games throughout the season and none were called off, compared to last season when we had five or six called off.

"I'm sure Pontypridd will sort it out. It's a club I love and I hope people don't think we are trying to pull something over them.

"The usage has most probably flattened the pitch and made it a little bit harder than what it was. I'm guessing that's why these friction burns have occurred."

Last month, Pontypridd outside half Ceri Sweeney retweeted a picture of burn marks he received to his face during a game against Newport.

Sardis Road is due to hold an international under-18s tournament next month.