Merton Council has given the green light for AFC Wimbledon's £20m (US$30.2m, €27.8m) stadium development to be built on the site of its former Plough Lane home 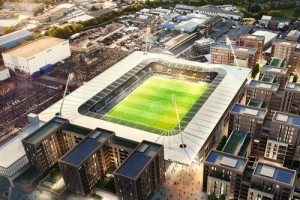 The League Two club found out the fate of its ambitious proposal during a Merton Civic Centre meeting last night (10 December). It first submitted the plans to the London Borough of Merton last November.

Erik Samuelson, AFC Wimbledon's chief executive, said the decision heralded a "momentous day for the club" and "the most important event since we reformed it 13 years ago".

"Following the sale of our former Plough Lane site and the decision by the FA to allow Wimbledon FC's Football League place to be moved to Milton Keynes, our fans did something unprecedented in the football world," he added.

"We decided to re-form the club, enter the football hierarchy at the lowest level and repeat what the old Wimbledon FC did with massive success, namely make our way up through the many leagues into the Football League."

The development will include a 20,000-seater stadium, which will be built with an initial capacity of 11,000, and 602 residential homes to be developed by Galliard Homes and GRA Acquisitions.

A squash and fitness facility, as well as a retail unit, will form part of the development. Galliard Homes director Mike Watson said the development would "make a significant contribution" to Merton's 10-year regeneration plans.

The stadium will be built on the Plough Lane site, which the club occupied between 1912 and 1991. It is currently home to stock car and greyhound racing. Construction work is expected to begin towards the end of 2016, with the club taking up residence for the start of the 2018/19 season.

For the full article, visit sportsmanagement.co.uk.