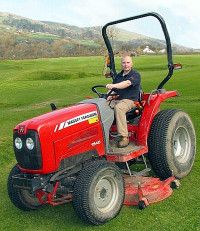 Laid out on a rugged hillside overlooking Conwy Bay, Llanfairfechan Golf Club provides a stimulating round of golf for players tackling the gradients and undulations of the attractive, parkland-style course.

Opening in 1973, the golf course has very few level surfaces between its nine tees and greens, adding a real challenge both to play and to maintenance, the latter undertaken by head greenkeeper, Clive Humphreys, with part-time help from club committee member, Dewi Evans.

Over the past 18 months, Clive has established a work routine centred on a 38hp Massey Ferguson 1540 compact tractor. Although its primary role is cutting the fairways and semi-rough using a 1.83m mid rotary deck, the tractor is proving a valuable workhorse throughout the year, towing a trailer to move materials, hand machines and other items needed by Clive and Dewi to maintain the course.

Prior to the arrival of the MF1540 tractor in late 2005, the club's principal power unit was an ageing two-wheel drive agricultural-type tractor. "The STRI produced a report on the course shortly after my arrival in August 2005," recalled Clive. "One of the health and safety recommendations in the report was that we ought to be using a four-wheel drive compact tractor which would be able to negotiate more safely our many steep slopes without fear of overturning or sliding on damp grass."

"It is no exaggeration to say that I knew that it was the right tractor for us within 10 minutes of getting behind the wheel," said Clive. "All of the controls fall instantly to hand, the engine is very smooth running with loads of torque and the tractor is really well put together. Most important of all, I felt safe driving it on all parts of the course, even up the steep slope to the sixth green known locally as cardiac hill."

Although Clive admits that it may be unusual to be cutting both the fairways and the semi-rough with a rotary-type mower, he explained that the finish produced is in line with members' requirements.

"A survey carried out a couple of years ago revealed that members wanted the course to provide a greater test of golf," he said. "A number pointed out that tightly-mown fairways gave an advantage to those who did not hit the ball long off the tee. On our down slopes, all they had to do was get the ball onto the fairway and it just kept rolling."

The result has seen the previously-used hydraulic three-gang cylinder mower pensioned off to be replaced by the MF tractor and its mid rotary cutter deck. Instead of being trimmed to 1in (25mm) or less, the fairways are now allowed to grow to 1.5in (38mm) while the semi-rough is cut at a consistent 3in (76mm) throughout the season.

"Combining the tractor and mower into a self-contained cutting unit has improved manoeuvrability greatly, reducing by 50 per cent the time taken to get round the course," commented Clive. "Adjusting the height of cut is also far quicker than on our previous gang mower. Furthermore, golfers actually appreciate the increased grass length. It may not help those who do not hit the ball far off the tee but it rewards everyone who plays a great approach shot to a green. There is nothing worse than seeing a well-struck golf ball roll back down the hill because the grass is too short to hold it."

Summing up, Clive commented that the Massey Ferguson tractor had been invaluable on the course since the day it arrived. "Being so simple to drive it's like having another pair of hands on the course, making my job much easier and far more productive than before," he said. "The tractor has lived up to all my initial expectations and we have had great support from Massey Ferguson and our local dealer. The club is delighted with its investment."

Image: Clive Humphreys says the 38hp MF1540 is like having another pair of hands on the course.