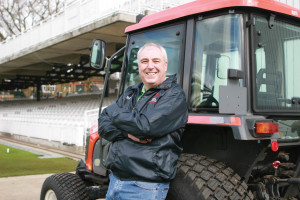 It is the time of year when many school sports pitches look more like mud baths than playing fields.

And in its quest to ensure pupils have a top quality surface to play on, a school from County Tyrone has turned to Lord's.

It has not sought divine intervention - rather St Joseph's Grammar School in Donaghmore has invited the head groundsman at the home of cricket to inspect its pitches.

Michael Hunt describes himself as the Marylebone Cricket Club's (MCC) "head of grass". He has worked at the London ground for 44 years, and in 2012 he was named groundsman of the year.

Walking out onto a gaelic pitch for the first time, he said whatever the sport or the standard, the playing surface is crucial.

"People can't perform on sub-standard pitches, the best will come out of players if they're playing on a good surface, whether it's an individual or a team."

He met the principal of St Joseph's, Enda Cullen, many years ago during a cricket match at Lord's, and a recent visit to Northern Ireland was too good an opportunity for the school to miss to get his advice.

"We have the best groundsman in the world in Northern Ireland at the moment, why not get him here, and he's really given us some good advice."

The surroundings may be unfamiliar but the Lord's groundsman was impressed by what he saw.

"The guys have done a great job... look there's not a weed in sight there, which is very good."

The greatest problems he faces at Lord's are foxes, and cricketers.

"Central London, you wouldn't believe there's foxes running around. They can do quite a bit of damage. They bury bones, they take bits and pieces out of the grounds.
"During the summer it's cricketers. They're the biggest problem, having them running around. All your hard work and they come out and start running around the ground."

The man in charge of maintaining the school's pitches, Kevin McElduff, faces a different set of issues.

"The weather's a bigger thing here than Lord's," he said."You get frosts, rain, just the usual, you don't really get a good summer here.

"Playing fields are being constantly used by children. It's hard to get them off it to get it cut."

Winter is a down time for Michael Hunt after a hectic summer schedule of cricket, and he does not have to worry about mowing the lawn at home.

"I concreted it over. We had a little back garden - that was the first job I'd done, was concrete that over."