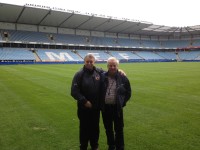 Sweden, one of the most frequented golfing destinations in Europe, is on a mission towards more sustainable turf care and 'Activated Microbial Turf Management' is proving to be a hit at golf courses across the country.

The game of golf had a slow start in Sweden: the first golf course was opened in 1888 and by 1954 there were only 38 clubs and 7,000 players. However, the years to follow, and the 1990s in particular, saw a period of rapid growth for the golf industry and today there are nearly 500 clubs and 498,000 registered players.

Now, in the EU, only second to Britain in absolute number of golfers, the Swedish golf industry is also at the top of its game in sustainable turf care initiatives. With this comes a pre-empted decline in use of petro-chemicals and fungicides as superintendents seek more sustainable alternatives.

Three of The Great Turf Company's Directors, Ian Macmillan, Jimmy Kidd and Andrew Turnbull, presented a workshop to a number of superintendents and agronomists at Ljunghusen Golf Club, with great interest from most that attended. Here, The Great Turf Company formed a bond with Goran Hannson, an agronomist from the Swedish Golf Federation, having identified a mutual vision for a chemical-free future for turf management.

Goran introduced The Great Turf Company to Lennart Månsson International (LMI) an established supplier of turf care products and advice based on many years experience and great knowledge of the industry. Very soon a partnership was formed with LMI and Ian Macmillan was invited, along with TGTC's Managing Director, Ian Morrison, to Gothenburg Golf Show which proved to be a catalyst in raising further awareness of TGTC's ethos within this huge market.

LMI took its first order of TGTC products in March this year, including a number of TGTC's staple compost tea systems, and the phenomenon of microbial greenkeeping took off from there. Staffan Månsson, LMI's Product Manager said, "We believe in giving nature back its power. Our partnership with The Great Turf Company can help the Swedish turf care industry to achieve this."

On a visit to Sweden last month Ian Macmillan saw that users of TGTC's compost tea systems and natural fertiliser products have seen an identifiable reduction in the amount of synthetic fertilisers and fungicides required. Furthermore, several prestigious courses, including Osterlen Golf, Tomelilla Golf and Flommens Golf, which had trialled TGTC's products over the winter period, have entered the new season with no winter kill: a significant change from previous years.

Ian's visit also saw the conversion of a number of other leading venues to Activated Microbial Turf Management, including Ystad GC, host of the first Swedish Tour CPTN, and Malmo FF (Football Club).

On returning from his trip Ian said, "Activated Microbial Turf Management is the future of the Swedish turf care. It is sweeping the country at rapid pace, just as the game of golf did in the 1990s. And like golf, it is here to stay."