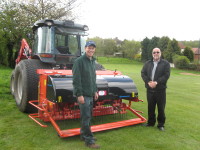 id Kent GC has chosen a Wiedenmann Terra Spike for the third successive time to carry out all its aeration requirements at the Gravesend course.

Course Manager, Lee Sayers said he had no hesitation in choosing a Terra Spike; his only dilemma was which model to select for the club's free draining chalk-based turf.

"We tend to change our main kit every five to seven years. Our original aerator was a Wiedenmann P8 bought in 1999. Seven years ago I replaced that with the Terra Spike XP with hydraulic depth control. This time round the key decision was not which manufacturer - it was more about the model to suit."

The team at Mid Kent had to weigh up whether to opt for a slightly faster XD machine that went down to 275 mm or whether they needed the capacity to spike to 400 mm.

"We have varying levels of topsoil over the chalk. As often as not, we're tining our fairways, tees, approaches and semi-rough to 200 mm deep. Now and again we have it working at full depth with new tines on for a few spots that hold the moisture more, so the eventual decision was to go with a direct repeat of the Terra Spike XP."

After 13 years of regular aeration the turf at Mid Kent is in excellent health. Since his arrival in 2003, Lee Sayers has devised a precise and thorough maintenance programme. Testimony to its effectiveness was when 86mm of rain fell in just eight days during April and flash flooding in the vicinity, members at Mid Kent resumed play shortly after the rain stopped with no ill effects to the course.

Aeration is carried out virtually every day from the end of October until March; the greens spiked three times a year and every cut surface at least once. With the XP simple to operate, the entire greenkeeping staff of seven is involved, everyone allocated one day of aeration duties per week.

"In an ideal world I'd take two aerators - allowing a smaller one for tees, greens and tight spots - but we are incredibly fortunate that we can just about get away with using the 2.10 m machine everywhere about the course," continues Lee Sayers.

"Our Massey Ferguson 3615 tractor has particularly wide rear tyres and in fairness without those, there are some locations where it would be quite restrictive to work. I'm really happy with the Wiedenmann. The fact that we've bought our third machine says more than anything else. If we'd had any concerns or problems then you might have bought a second one but you wouldn't have bought a third one!"

Sales Manager, Vic Maynard from dealer, Ernest Doe at Dartford said: "Wiedenmann aerators are extremely reliable and efficient. Once customers experience a Terra Spike they have the bar set very high. With the extra deep XP, Lee and his team continue to have the perfect aerator for what they want to achieve."