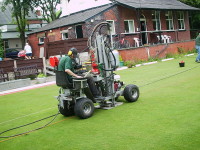 At Leyland Fox Lane Sports Club, four miles south of Preston the thriving Winter Bowling League had had to be suspended in November due to water logging on the Crown Greens. When it poured down in mid May Chairman David Bradshaw feared for the summer season.

"We'd spent two months scarifying the greens and filled 16 builder's bags with the debris," he says, "but the first time we had heavy rain there was standing water that was still there at 5.0pm. At 6.00pm. it rained again and I thought that if we didn't do something we would lose games during the summer. Although we'd spiked both greens the water wasn't getting away."

Terrain Aeration arrived with the company's Airforce Scamper machine and proceeded to treat the larger of the two crown greens (approx 1,764 sq metres), inserting the probe one metre below the surface, injecting compressed air to create underground fractures and fissures followed by dried, milled seaweed on the final air blast, which, as it swells when wet keeps the newly formed fractures open.

"The first runs were in an area that was very dry due to nearby trees and this was hard going," remembers Terrain's MD David Green. "Once into the main body of the green it became apparent that there was a band of heavy red clay subsoil across the central 10 metres that could not be treated by the normal method because it simply bunged up the probe every time. Instead, the hole was bored and compressed air released without seaweed injection, to just shatter the soil. The air receivers were recharged to 17 bar and then seaweed was injected into the already shattered subsoil." Although this 'double shooting' meant that the operation was considerably slower than normal it was effective and faster than continually clearing the probe blockages by hand. The probe holes were backfilled with Lytag to below 100mm of the surface and then topped up with top dressing. Having treated the entire green, Terrain Aeration worked on problem areas on the smaller green before leaving site and at 10.30pm. David Bradshaw turned on the irrigation system.

"We had a Federation League game at 10.00am the next day, and since then we've been watering the greens for 10 to 15 minutes every evening," he reports. "Watering in is now no problem."

Brian Lambert, Chairman of Seedfield Bowling Club in Bury was well aware of the compaction problems affecting his Crown Green. "The club goes back 115 years which means that the green's been down a long time," he says. "With evening matches Monday to Thursday, Veteran pairs in the afternoons and competitions at the weekends the green is constantly trodden on from Easter to the end of September."

One frosty morning about 10 years ago Brian noticed a number of lines on the green which he guessed marked the location of the drains and he had the foresight to draw a map. Following heavy rain this May, which left a line of puddles on the surface, Brian and his members dug down to investigate the subsoil. "The ground was very heavily compacted," he remembers. "It was almost rock hard and impervious, which explains why rain water was staying on top and not penetrating to the drains."

Brian called Terrain Aeration, who arrived within 10 days and treated the green, having negotiated Airforce Scamper down the steep, slabbed steps (descending eight or nine feet from the road level entrance), which was the only access. Club members had marked the position of the drains and an underground foul water drain and Terrain were careful to avoid them. With a match planned for that evening club members bowled a few test shots to gauge the condition of the surface. All was well and the decision was taken to play. Having treated half the green that day, Terrain Aeration finished the next day and moved off site.

The following weekend, heavy rain flooded the green by noon on Saturday, which was cleared by members using squeegee mops. At 1.00pm the scheduled match went ahead. "We were playing on a perfect, slightly wet surface," Brian reports, "and although there were subsequent light showers no more surface water collected."