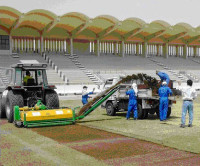 Traditionally, the clubs spend 2 to 3 weeks at the start of the "close season" doing an "annual heavy maintenance" on the fields. This involves about a dozen operators and labourers to sequentially verticut, close mow and sweep the field until most of the above-ground material (hopefully including most of the thatch and mat) is removed.

Once they can "see the ground", then the hollow-core aerator comes into play and a couple of passes of this are required to alleviate some of the accumulated compaction from the season's play. The soil cores are then swept up before a layer of fresh sand is trucked in, spread over the field, and the drag-mat used to level this.

We have just started our 3rd season of carrying out this work with the Koro System, and have contracts so far for this year amounting to almost half of the 50 or so "league clubs" in Saudi Arabia.

The Koro System uses the FTM to strip the grass, thatch, mat, and any small "bumps" in the field in one operation. The spoil from this is collected directly into light tipper trucks running beside the tractor/FTM and dumped outside the ground (sometimes with local lawn-owners being invited to help themselves to the "sprigs"!) This takes one, often long, day.

The Koro RD is then used to very heavily aerate the ground. Rotating blades cut continuous "slots" in the soil about 8 mm wide and 18 cm apart, then a fixed knife in-between each pair of rotating blades penetrates the soil to open another slit and "shear" the soil between the slits. The "spoil" from the rotating blades is thrown onto a conveyor belt on the machine, and spread on the ground after the blades have passed, giving top-dress spread (at no cost) ready for the drag mat. The RD can usually make a pass over one field in 5-7 hours, the linear aeration thus achieved far better than with a couple of passes with coring tines. All this in 2-3 days, instead of the 2-3 weeks with "conventional" labour-intensive methods. 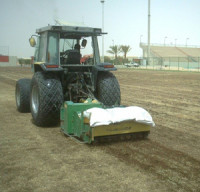 Our Koro RD is the 1.3 metre "RD130" version, which we have found is perhaps a little to "lightweight" for such a heavy programme. Over these last seasons, a few modifications have been made and more robust blades made-up locally to cope with extensive use on heavily-compacted soil. We hope to have a bigger and heavier version of the RD for next season.

There has been a lot of interest from Saudi Arabia and other Gulf countries in this system, including a contract for Bahrain National Stadium last year, and the Bahrain Rugby Club, as well being involved in the reconstruction of fields in Saudi Arabia (in conjunction with our laser surveying and leveling equipment)

Water-Saving - Our next target is to be able to inject material into the sub-surface of existing fields. There is increasing awareness here of "Aquafeed", an inorganic material that can be used when constructing a turf-grass area, which is virtually everlasting and can save 30 or 40 percent (conservatively) of the water required for irrigation.

Two soccer clubs in Saudi have already installed Aquafeed during reconstruction of their fields and three more are committed to "post-installing" this material, so we are developing a modification to a Koro RD to enable this to be done quickly and accurately. Water-saving is becoming a very important issue in the Middle-East - as well as Southern Europe, after the water shortages experienced there recently!

In addition, Aquafeed helps to reduce the fertiliser bill by reducing the amount of nutrients that are washed through the root area and into the drainage system - not only in the interests of economy, but good for the environment too in an area where ground water is becoming increasingly high in dissolved salts!

We see Aquafeed as an important emerging market for the coming years and we are currently talking to a large hospital, with extensive landscaped grounds, with a view to saving them a large part of a very heavy water bill. We will report back to Pitchcare when the "post-installation system" is working, hopefully later this year.