by Jane Howarth
in Rugby, Pitchcare News, and Industry News
on 16 Oct 2015 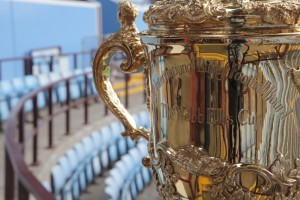 England may have crashed out of the Rugby World Cup, but the West Midlands continues to fly the flag for the sport that was invented in the region.

UK Trade and Investment (UKTI), which has hosted a number of exporting events in the region to mark the fact that two of the games were held at Aston Villa Football Club, has supported the production of a short film to celebrate the region's connections to the game.

Featuring Rugby School, the Webb Ellis Museum, Aston Villa FC, and Moseley Rugby Club, the 15-minute film, produced by Midlands-based company Iconic Productions, looks at the origins of the game and its legacy in the region.

It has already been viewed by more than 7,000 rugby fans at the Birmingham FanZone near Millennium Point, where it was aired on a 100 sq ft screen, it was shown at Aston Villa FC last week and is due to be screened at Moseley Rugby Club today (October 16) after the Moseley v Ealing match.

It is also being shown four times a day at the 'Rugby Village'.

The video features Shropshire-based Maxwell Amenity, which now export its services and products to Hong Kong and Ireland, thanks to UKTI help.

Dave Saltman, Managing Director of the company, says: "Venues like Rugby School have helped our portfolio, and helped us to gain work, such as in Hong Kong for the Rugby Sevens and the Aviva Stadium in Dublin. We are supported by UKTI and through their help, we hope we can open a lot more doors."

James Mead, Head Groundsman at Rugby School, described The Close at the school - a sports heritage site which where the sport originated - as "the hallowed turf".

"To be head groundsman at Rugby School is an absolute privilege; it's the home of the game. The Close is the hallowed turf and, at all times, it has to look immaculate, if there are any visitors coming from Argentina, New Zealand or wherever it may be," he said.

Christine Hamilton, Acting Regional Director of UKTI West Midlands, said: "The West Midlands is rightly proud to declare rugby its home and we wanted to celebrate the great work that organisations are doing across the region in the sport. Our Rugby World Cup export events have been well supported by companies that have their eye on the ball and want to maximise their opportunities overseas."

To view the video, visit http://iconictv.co.uk/rugby-a-midlands-story/

UK Trade & Investment (UKTI) is the Government Department that helps UK-based companies succeed in the global economy. UKTI also help overseas companies bring their high quality investment to the UK's economy, acknowledged as Europe's best place from which to succeed in global business.

UKTI offers expertise and contacts through its extensive network of specialists in the UK, and in British embassies and other diplomatic offices around the world. They provide companies with the tools they require to be competitive on the world stage. For more information on UKTI, visit www.gov.uk/ukti