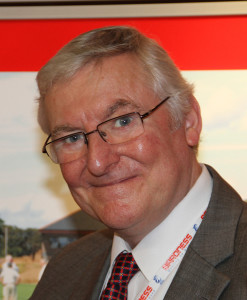 It is with much sadness that we inform you of the passing of Mike Beardall, the former editor of The Groundsman magazine.

Mike began his career in journalism working on the Banbury Guardian in Oxfordshire, and worked on other newspapers as a reporter, feature writer and, later, production editor of Surrey and South London Newspapers Ltd.

In the Eighties he joined the Daily Mail group as a sub-editor on Weekend Magazine, later becoming chief sub-editor.

In 1982, he worked on the launch of the Mail on Sunday, and also undertook sub-editing on the Sunday Express, Daily Express and the Daily Star.

In 1987, he became editor of the Middlesex Chronicle and deputy group editor of Surrey and West London Newspapers Ltd.

In 1990, he became editor of the West Sussex Gazette and, in 1991, as managing editor of Merlin Publications Ltd, launched a national business magazine for homeworkers called Home Business followed, in 1992, by a magazine for small businesses called Your Business.

In 1995, Mike launched Oakfield Media, offering a full publishing, public relations and media training service. He was part of the team providing media training programmes for EMAP and other magazine publishing groups.

As part of his publishing portfolio he became editor of The Groundsman, the official magazine of the Institute of Groundsmanship - a post he held for eleven years, until December 2006.

In recent years, Mike occupied his time by producing newsletters and public relations material for a number of companies, including P&O, The Fowler Group, DJ Turfcare and Speedcut Contractors, as well as writing assignments for consumer and trade magazines and newspapers.

Mike was a 'gentle' man in every sense of the word, He handled adversity in both his business and private life with dignity and always made himself available to industry colleagues with the minimum of fuss when support and assistance was required.

He was the consumate professional and will be sorely missed by all who knew him.

Our thoughts are with his son Ben, his daughter Kate and two young grandchildren, Harmony and Ed.