by Louise Prettyman
in Industry News
on 26 Mar 2015 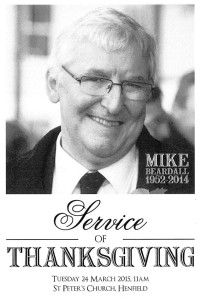 Mike's untimely death shocked all in the Groundcare industry. Whilst he was widely known to us all in his professional capacity we may not know his interests outside of it.

Mike moved to an East Sussex village called Henfield within the last decade and quickly became a local figure - so involved did he become with village life that over 100 people have gathered together to pay their respects to him.

Those in attendance last Tuesday March 24th at St Peters Church, Henfield, heard about his never ending energy to support local charities in their fund raising activities - the Church itself included in the list. Support included turning up with his camera and capturing events for Press inclusions, which he himself placed, to organising events from scratch - like an annual late night shopping extravaganza near to Christmas.

The use of a handy chair being the one prop in common with his professional work!

It appeared that not one charity was overlooked from the British Heart Foundation to the local Friends of St. Barnabas Hospice - all were covered and reported on in the local newspapers.

The memorial service heard from Mike's son-in-law who read from 'What my Father taught me' written by his wife, Mike's daughter Kate. This summed up the Mike we all knew - never on time, always laid back - but one thing we didn't know, 'don't walk backwards when flying a kite - especially near a cliff'. This actually happened to him and astounded the paramedics!

Other tributes were from his next door neighbour who recalled Mike's all consuming passion for a 'good cup of tea' even to the last, and from a relative of the writer who let Mike know she had an Auntie Peggy in the village before he moved there. He asked where he could find her and stood in the doorway of the shop she helped out in asking in a loud voice 'who's Auntie Peggy'? From then on numerous photographs were emailed through of all the activities she got involved in around the village.

To a man all the tributes echoed our own in the industry - he will be very much missed.