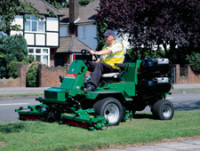 Millbrook, the independent vehicle test and development centre with its comprehensive range of tracks and laboratories, has been working with Ransomes Jacobsen and LPG supplier Calor to test, evaluate and improve the environmental emissions performance of a range of ride-on municipal mowers.

Commercial and professional turf maintenance equipment is more commonly associated with environmental improvement than damage, but many grass cutting machines rely on internal combustion engines for their power and this could mean the risk of harmful emissions.

The Ransomes Jacobsen's range of mowers include large, ride-on units with engines of up to 38kW, which are widely used by local authorities and contractors around the world to maintain parks, sports fields and public spaces. It was these types of machine that the company wanted to evaluate.

Darren Carter, Senior Engineer at Millbrook responsible for the test programme said, "The engines used in these mowers are too small to be covered by any current emissions legislation so there really hasn't been much work carried out into their emissions performance. At the same time, engines of this size can produce a lot of harmful pollutants if they are not calibrated correctly."

The first challenge for the engineering team was to develop a realistic duty cycle for a municipal grass cutting machine. Armed with such a cycle, various machines could then be tested on Millbrook's state-of-the-art chassis dynamometers and their emissions performances evaluated.

Carter and his colleagues decided on a two-phase approach to the test cycle, with the first phase simulating on-road use, as the mower is driven to its work site, while the second phase simulates the grass cutting process. For the second phase of the tests, the Millbrook team had no precedent on which to base their model, so they created their own using a football pitch as the basis for the cycle because it involved a lot of straight passes at full power with tight, low speed turns in between. The team further refined the cycle by including allowances for gradients in some of the test passes.

Using these new cycles, the Millbrook team tested a range of petrol, diesel and LPG mowers and achieved some spectacular results, as Darren Carter explains, "With the LPG mower in particular, we were able to use the collected data to fine tune the engine calibration and reduce some types of emission by 100 fold."

The data obtained by Millbrook was then used by Ransomes Jacobsen to produce further emissions improvements. They used the information to commission a specially designed exhaust catalyst that is now available as an option on its LPG mowers. Further research is being undertaken, using the Millbrook test cycle and expertise, to investigate the feasibility of installing electronically controlled engines on their next generation of machines.

Richard Comely, Product Manager at Ransomes Jacobsen concluded, "Once again, we are at the forefront of a technological innovation in our industry sector. With EC legislation demanding a 7% reduction in emissions by 2004 and with one in ten local authorities actively pursing an environmental policy, with others watching what happens, it's not surprising that environmental concerns are influencing major buying decisions for local authorities.

"The work done at Millbrook has proved invaluable and we are delighted with the results. We have progressed almost as far as possible with the mechanical LPG engine and are looking at a more sophisticated closed loop, electronic control that could help produce even better performance in terms of fuel economy and reduced emissions."