The Millennium Stadium provides a superb sporting and concert arena, but is very challenging for the growth of good pitches. The lack of light, as shown by an STRI hemiview light study, was insufficient for growth for much of the year, and a rapid decline in sward quality often occurred.

The Millennium Stadium pitch is based on a palletised system and is kept in the stadium for the two playing periods from around August to November and January to May. When necessary the pallets are stored off site. The pallet fill consists of an aggregate drainage base, Fibresand added rootzone and deep turf. There is approximately 200mm of rootzone.

In the past the condition of the pitch has been criticised and a number of returfing activities have been required to maintain a good surface during the playing season. Early photographs show more bare ground than grass. The need to returf during a playing period proves to be both labour intensive and costly. The key aim of Lee Evans, the Head Groundsman, is to maintain a good surface throughout each playing period without the need to returf in season.
Pitch moves

At the end of a playing cycle, the palletised system is lifted and removed to the off site storage area. The sward is not grown as a pitch outs 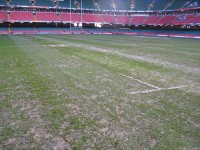 ide of the stadium. This is partly due to the lack of suitable pitch sized space in the city and the fact that the pitch in effect becomes 7,000 1.2m x 1.2m squares.

Particular difficulty with regard to developing a pitch surface is the very large number of potential joins (28,000), not to say anything of the low light environment, which increases the risk of poor rooting and the turf cutting up. When the pitch is returned to the stadium, the surface is Koroed-off to remove any vegetation, cultivated and additional rootzone is added, as necessary, prior to returfing.

Lee employs a contractor to returf the pitch. Currently this is done using 1.2m x 15m 40mm thick turf, but this may increase to 2.0m wide turf. This is laid in a 24-hour period. The 'Big Roll' turf results in very few turf joins and, hence, less risk of lifting under play. Following laying, the turf would be strong enough to play on immediately, but the general consensus is to allow a two week period to settle in. This allows Lee and his team to develop the surface.

In the future it is hoped that custom-grown turf will be used to prevent any incompatibility between turf rootzone and that in the pallets. The grass mixture is mainly ryegrass with some smooth-stalked meadow-grass. The smooth-stalked meadow-grass is particularly useful during the spring season as it appears to start growth earlier than ryegrass. In the autumn the ryegrasses tend to be stronger. With the use of supplementary lighting, which creates useful heat as well as light, ryegrasses are mostly used for repair due to rapid germination times. 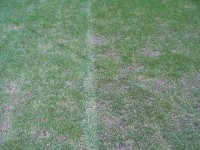 ly clear that the level of mechanical operations undertaken was causing significant pitch wear. In such low light environments the use of a ride-on mower or tractor caused wear and reduced pitch quality. This practice was immediately stopped and lightweight rotary and pedestrian mowers used to cut with resultant reduced wear. The turning areas at the ends still suffered but are out of play.

Pitch repairs and aeration were also undertaken by hand and with sarel rollers. It was difficult to deep spike as the pallets became damaged. When the pallets are removed, the rootzone is now 'fluffed-up' with small rotary cultivators. This relieves compaction and aerates the profile.

The height of cut is maintained at a high level to reduce the impact of play and support the best possible grass cover. With firm surface characteristics the longer grass cover is generally not an issue.

Fertiliser application is kept to a minimum and orientates around autumn/winter formulations. Overuse of fertiliser gives lush, weak growth that rapidly declines. Typically, fertiliser is applied every six to eight weeks, iron products being used to give colour for major events rather than nitrogen.

With the above strategy in place, the pitch is generally acceptable with one turfing for each playing period. However, the surface is susceptible to wear and, by the last game of the autumn period, can be very thin. There is, naturally, a desire to improve the quality of the surface, and the use of lighting rigs offers this possibility. 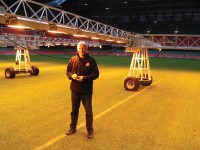 A trial in January 2007 was undertaken with two lighting rigs. These were used in the darkest south end of the stadium on a 48-hour cycle (48 hours on and then 48 hours off) with occasional break periods. The net effect was significant. The speed of the turf rooting into the rootzone was increased by 10 days over the lightest part of the stadium. Grass cover was noted to be greatly improved with the sward recovering from damage much quicker. Indeed, the amount of cover was consistently higher than the sunny north end of the stadium.

The use of lights is now becoming the norm in stadia and the benefit to the Millennium Stadium is such that a full pitch lighting system is now in place. The lights will also be used at the northern end to ensure the best possible growth and recovery from wear.

The lighting rigs are probably the final piece in the jigsaw to maximise sward health and performance, although it is likely that with lighting there will be further changes in maintenance practices. There will be ongoing reviews of most maintenance treatments, but particularly mowing heights, fertilising and irrigation.