Great Cumbrae is the larger of two islands known as The Cumbraes in the lower Firth of Clyde in western Scotland. It is a popular holiday destination and, whilst locals total a little over 1,350, this number increases considerably when visitors flock to the 2.5 mile long x 1.2 mile wide island during the holiday season.

It's smaller sister island - unsurprisingly Little Cumbrae (or Wee Cumbrae to give it its Scottish notation) - is technically uninhabited, although the ruins of a castle, a chapel and a still working lighthouse point to previous residents, and there is a caretaker looking after the Victorian pile of Little Cumbrae House on occasions. More illustrious island neighbours, such as Bute and Arran, can be clearly seen, whilst the coast of mainland Scotland appears to be but a stone's throw away.

Great Cumbrae is home to the Sport Scotland National Watersports Centre, the Cathedral of the Isles and the Field Study Centre, whilst Crocodile Rock is a somewhat quirky tourist attraction. Additionally, the Commonwealth Torch used in the Queen's Baton Relay was crafted using locally sourced Elm wood from the garrison grounds in Millport, the only town on the island, which occupies the full length of the island's southern shore. The mainland town of Largs provides a regular ferry service to transport visitors and locals to and from the island. The ferry docks at a slip to the north of the island, close to the round island coast road which is very popular with cyclists.

The land on the island is primarily owned by the farmers, with the other major land owner being Millport Golf Club.

The club was formed as the 'Cumbrae Golf Club' in 1888 by gentlemen members of the Glasgow Golf Club, who wanted to play golf when on holiday in Millport, plus a few local worthies. It was originally a 9-hole course laid out on land rented from Damhead farm.

Following a change of ground leasing arrangements to lease directly from the Marquis of Bute, the club gathered momentum and a clubhouse was erected in 1892. In the same year, the local MP presented a silver cleek for an annual competition between the Cumbrae Club and the Rothesay Club on Bute, a match that continues to be keenly contested to this day.

In order to avoid confusion with Comrie Golf Club, the name of the club was changed to The Millport Golf Club in 1900, and a new clubhouse, which forms the basis of the present one, was built in 1909. The course, which had been originally designed by members of the club, was improved under the recommendations of James Braid and George Duncan in 1912 and 1913.

Due to congestion, a second course was opened in June 1914, but the impact of the Great War led to its closure in 1924.

The original course was modernised in 1933, with the introduction of additional bunkers and contouring of the greens, at the same time becoming the 18-hole facility of today. The purchase of the golf course from the Bute Estate was completed in 1999.

It has been suggested that "Millport is an easy enough course from the yellow tees, if you catch it on a calm day and play reasonably well", but it's lofty position on the western side of the island means that it is often hit by winds in excess of 70mph coming in off the Atlantic. By contrast, the eastern side of the island is often a tranquil haven!

The heathland course covers a total area of 102.45 acres, which includes forty acres of woodland known as Fintry Woods and one of the last remaining traditional curling ponds in Scotland that measures just over eight acres.

The course comes in at just short of 6,000 yards, has a par of 68 (ladies par is 72 with a yardage of 5,228) and demands a full repertoire of shot making. There are several blind shots to test golfers' skills. Out of bounds come into play on the first seven holes, just to add to the degree of difficulty and, at the 2nd, confronts the golfer both right and left!

There are no par 5 holes; the course, comprises fourteen par 4s - two measuring 449 yards - and four par 3s. In addition, there are three large practice areas. 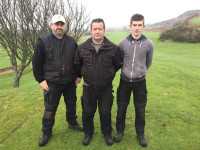 Tending the course is head greenkeeper Joe Bell, who has worked at Millport for a little over fourteen years. He has a deputy, Alan Brooke, and an apprentice, Darren Bell (his son), to assist him. They are, or are learning to be, compliant with all legislation.

Joe trained at Woodburn House, Langside College, before going on to hone his skills at Kilmacolm Golf Club, just south of Port Glasgow, under the watchful eye of then head greenkeeper Ronnie Bunting.

"The Millport course is built on clay," says Joe, "on land that the farmers couldn't use and, therefore, didn't want." It skirts around two reservoirs - lower and upper - that used to service the town.

"Drainage work is undertaken each winter to help alleviate the problems associated with the clay. This has taken the form of putting in ditches at strategic points, which not only helps to take the water away, but also enhances the hole. Other winter work includes the levelling of tees."

"As we are a small team, we operate an 'all hands to the pump' approach. During the summer months we cut the greens daily at 4mm, but also verticut twice a week before cutting. Once they are completed, we move on to the tees, fairways and semi rough. Bunkers are raked and edged daily and we overseed the tees as required. The greens are hollow tined regularly, followed by two tonnes of straight sand."

Joe says that, with so many visiting golfers, presentation is high on his list of priorities.

The course has a full irrigation system, with water being drawn from the Minniemoer, the larger of two small lochs at the northern end of the course close to the highest point on the island. At this juncture, it is worth making mention of the curling pond at Wee Minniemoer. This is an area where water is controlled via a sluice gate and allowed to freeze. It remains shallow for safety reasons and is the traditional way of creating the playing surface for curling. As recently as 2010, the Dumfries Cup was played on the pond and it was also made available for public use. It is currently drained, but remains a rare example of a traditional curling pond, complete with a bothy.

Joe is responsible for setting the greenkeeping budget, but this has to be approved by the greens committee. To keep down the costs, some machinery servicing is undertaken in-house and machines are purchased when the last one has been paid for. "As we are on an island, we don't have many salesmen that come knocking at our door," states Joe, "so I have no particular loyalty to one manufacturer."

The current machinery list includes a Toro 6500 Reelmaster fairway mower, two Toro 3250 Greensmasters, a Lastec Articulator semi-rough mower, a John Deere pedestrian mower, a John Deere ProGator, a Kubota Grand L series tractor, a Kioti tractor and a utility vehicle. "It's pretty basic stuff," comments Joe, "and, if I had a wish list, it would simply be to have a fleet of new machinery."

"It's been very noticeable here that the winters have become much milder," states Joe. "This means that the dreaded fusarium has to be watched and controlled, which has an affect on my budget. Weeds are generally spot treated."

Great Cumbrae is snake free, allegedly driven out by St. Mirin on his return from Ireland. "But there are plenty of rabbits," bemoans Joe. "It's like Watership Down here!"

The island is a haven for wildlife and polecats, owls and eagles can be seen regularly, as well as a large seabird population including fulmars, cormorants, oystercatchers and many more. Marine life includes seals, basking sharks, porbeagle sharks and dolphins.

Joe lives on the mainland and says that the half hour ferry crossing gives him time to relax before beginning work. "It's lovely to not have to get up and get straight on with the job. It allows me time to gather my thoughts."

Equally, I suspect, the isolated location and beautiful scenery in this sometimes overlooked corner of Ayrshire go a long way to helping make Joe's working life content. One thing is for sure though, there are far worse places to be working.