0 Mister Sandman, Bring me a Dream!

In response to an article by Gordon Jaaback in the February/March issue of Pitchcare, where he asked "Must we accept potato patch pitches?"

By using their Shockwave and RotoKnife combination to incorporate up to 120 tonnes of Silica Sand down to (270mm) without layering, he says that they can produce high quality, well draining and durable pitches at a fraction of the cost of conventional sand banding. 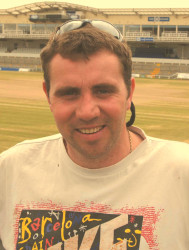 During May and June this year the Imants team worked in conjunction with one of their dealer/contractors, Kidderminster based Adrian Cooper of ARC Groundcare, and successfully restored 26 pitches at football and rugby clubs across the Midlands and South West. The list included such prestigious clients as Bristol Rovers FC and Newport Rugby Club in South Wales.

THE renovation programme begins with scarification, followed by the application of up to 120 tonnes of Silica Sand spread with a conventional topdresser. The Shockwave Revenge is then used to fully decompact the pitches to a depth of 270mm.

The action of the Shockwave blades, combined with the slotted steel flatbed mounted beneath it, and specially designed coulter knives, effectively incorporates a large proportion of the sand and decompacts simultaneously.

Next in the renovation line-up is the RotoKnife Multi Purpose Slitter/Aerator. Whilst the machine offers four different options in slit width and depth, Imants used the 'Big Discs' for this method, working from two opposite directions, corner to corner, to create multi-slits running at 45 degree angles to the Shockwave Slits.

The discs and twin rollers of the RotoKnife further incorporates much of the sand to (150 mm) whilst simultaneously aerating the soil. This operation is followed by drag-matting to pull the remaining sand into the multitude of diamond shaped crisscrossed slits made by both machines, before slit seeding from three different directions using a Charterhouse seeder Imants' John Reynolds has created new cost cutting renovation techniques for winter sport and applying pre-seed fertiliser before further drag-matting to complete the job.

ARC Groundcare completed the work at each venue in two days and were rewarded with quick germination and high establishment levels within seven days plus superb drainage and aeration/nutrient uptake throughout the soil profile.

Newport Rugby Club Stadium Manager Mark Jones said "We were keen to try this new technique after talking to John in April this year and can now whole heartedly recommend this method. Work commenced in early June, after a late end of season play-off match, and took two days to complete. 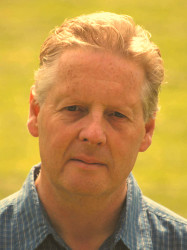 Germination was rapid and, despite the severe drought conditions and poor irrigation, we had superb results - 120 tonnes of sand just disappeared like magic and the pitch looks really great. I was so impressed that I ordered a Shockwave and RotoKnife immediately and intend to use these throughout the coming season. That put a smile on John's face!"

ARC Groundcare worked throughout to specifications drawn up by John and he was on site full time at all of the locations to supervise and record the work. Imants Managing Director, Felix Peters, commented "This is a major new development in really cost effective pitch renovation packages.

The whole process has been initiated, designed, and trialled, by John Reynolds and we believe this will be of major benefit to Non League and League clubs throughout the UK. There is no longer any excuse for poor draining 'potato patch' pitches when highly effective pitch restoration is available at such competitive prices."

"We have worked very hard to create a superb, and totally unique, technique using simple proven agronomic principles and efficient, very cost effective, Imants machinery operating in combination with the sort of machinery every contactor owns, to produce fantastic results."

"Sand Banding is currently available from UK contractors at around £1.00 per square metre involving costs of between £6,500-10,000 per pitch just for sanding! In contrast, this new technique offers a total pitch renovation package, including arification, decompaction, aeration, sanding, seeding, fertiliser at almost half the cost depending on specification and materials used."

John believes that many more UK contractors will adopt the techniques he has developed and make poor UK sports pitches a thing of the past.

The company are currently looking to appoint twelve experienced Imants, factory approved, contractors across the UK to implement these new renovation techniques to a common specification and price.