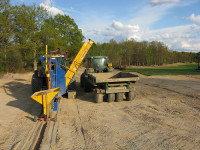 Leading sports turf contractor MJ Abbott Limited is moving quickly towards the completion of its first contract in France in a decade.

They began work in January at Les Aisses Golf, a part-woodland part-heathland development in the heart of the Sologne forest, some 20km south of Orléans. The three current 9-hole courses, which opened in 1992, have been redesigned by architect Martin Hawtree to create a definite 18-hole heathland course and separate 9-hole course which should prove popular in the busy golfing, hunting and fishing region.

Phase One comprises extensive tree clearance work prior to the development of the first nine holes, including the installation of primary drainage and a new irrigation system. A new putting green will also be built in front of the clubhouse.

The project is due to be completed within weeks and work on the remaining nine holes is currently scheduled for Winter 2010.

The course's owner, Alfred Seydoux, visited Sunningdale twice with architect Hawtree Limited to assess the feasibility of the project in 2007 when MJ Abbott was undertaking a bunker remodeling project. Similarities between Sunningdale and Les Aisses gave the client the opportunity to visualize what was possible for his course and also see MJ Abbott at work.

"The clubs I visited, Sunningdale and Swinley Forest in the UK in particular and Golf de Morfontaine in the Oise region of northern France, were a huge source of inspiration to me", he explained. "They are all beautiful English-style courses that work in harmony with nature."

This was especially relevant to Les Aisses as 350,000 hectares of Sologne area, which includes La Ferté-Saint-Aubin where it is situated, is classified as a Natura 2000 'Site d'Importance Communautaire' (Special Area of Conservation). Natura 2000 is a Europe-wide network of sites tasked with the preservation of natural heritage under the EC Habitats and Birds Directive.

Monsieur Seydoux continued: "In practical terms, the development of our Red and White courses into a definitive 18-hole will make hosting Championships more seamless. My selection of an English contractor to work alongside the architect has simplified communication between them and I'm delighted with the way work is progressing."