0 MJ Abbott in demand in golf and sport 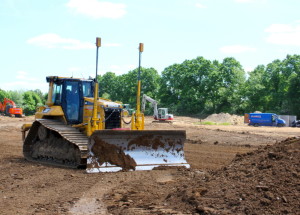 Being built on a former golf course located close to the club's current Sunbury-on-Thames headquarters, London Irish's new centre of excellence will consist of five full-size rugby training pitches - one of which will be 3G - and 12 junior pitches.

The new state-of-the-art rugby training centre will occupy around 20 hectares of land on the former Hazelwood golf course, which closed in March this year.

Included within the ground development contract, secured by MJ Abbott following a competitive tender and interview process, is the demolition of the former golf clubhouse, cut and fill earthworks, installation of drainage and irrigation systems and the seeding and initial maintenance of the new pitches.

As part of the contract, MJ Abbott will also carry out complementary landscaping on the site including tree planting and the creation of a new lake and wetlands on land surrounding the training facility. Handover to London Irish is planned for summer 2014.

In Cheshire, the firm is engaged on a large landscaping scheme for a private client. The works comprise major cut and fill earthworks on open landscape, construction of two large lakes and streams, formal lawn areas and tree and hedge planting on the 25-acre site.

In golf, the firm's site teams have returned to a golf venue where they made their mark in previous years.

Following the company's reconstruction of greens and bunkers on the back nine at Royal Mid Surrey Golf Club's Outer Course in 2009, MJ Abbott has returned to the club to remodel the Outer Course's front nine green complexes, chipping greens, Taylor mounding and fairway bunkers.

Working to a design produced by McKenzie and Ebert within a project managed by Charles Henderson of Sports Agronomy Services, MJ Abbott will be replacing also the greens irrigation system as the contract proceeds.