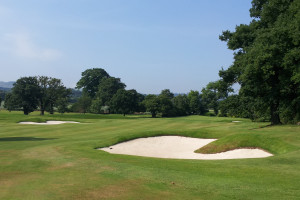 Leading sports turf contractor, MJ Abbott Limited, reports a strong upturn in business across the board in 2013 and anticipates making further progress in 2014 as the economy continues to strengthen.

The company's golf construction division enjoyed a particularly successful year with a string of substantial projects, in marked contrast to 2012.

Steve Briggs, MJ Abbott's Contracts Director, explained: "In 2012, we only constructed three golf holes - two at Effingham Golf Club at the beginning of the year, and one at Woking in the autumn.

2013 was a completely different story," he said. "The year got off to a strong start with an 18-hole reconstruction of the Filly Course at Close House, near Newcastle upon Tyne. We then moved on to a reconstruction of the front nine holes of the Outer Course at Royal Mid-Surrey and a complete rebuild of 14 greens at Long Ashton Golf Club, Bristol."

"And it's not just major projects where we've seen an upturn," continued Steve. "In 2013, we carried out bunker refurbishments at Copt Heath, Gerrards Cross, North Hants and Flackwell Heath. There was also the construction of an irrigation water storage reservoir and reconstruction of tee complexes at Birchwood Park Golf Centre, Dartford, Kent, on behalf of Burhill Golf & Leisure."

MJ Abbott's sports division was also exceptionally busy during 2013, constructing at Sunbury-on-Thames in West London a world-class training complex for elite and community rugby on behalf of Aviva Premiership side, London Irish.

Nathan George, the company's Contracts Manager, pointed out that London Irish is MJ Abbott's biggest sports turf project for several years, comprising 16 natural turf pitches and a 3G artificial pitch using the latest Rhino Turf IRB22-accredited surface. "We have carried out the works almost entirely in-house, so our expert drainage, irrigation and finishing teams have been extremely busy," he said.

"It's not just been about London Irish, though," continued Nathan. "Elsewhere, we have constructed natural
turf pitches on three new academy school sites in Sussex for Balfour Beatty and at two sites in Buckinghamshire for BAM. We also completed reconstruction of the sixth-form cricket ground at Harrow School."

The wet weather throughout 2012 led to a number of drainage projects being secured in 2013, as Steve Briggs explained. "We have installed drainage for several golf clubs during the year, including greens drainage at Woking, Petersfield, Chelmsford and Royal Winchester, fairway drainage at Hartley Wintney and Lee-on-the-Solent, and gravel banding at St Ives (Hunts) Golf Club. We also supplied a drainage crew to help with the construction of the new course at Ramside Hall, County Durham."

"We are excited about the prospects for 2014," concluded Steve. "We have a number of orders on our books already, golf course architects and sports turf consultants are busy preparing tenders, and there is a vibe around the industry generally that things are improving".

To learn more about MJ Abbott's sports turf and landscaping projects, past, present and future, visit the company's stand (A49) at BTME 2014 where knowledgeable staff will be delighted to provide assistance and information.