With yet another Open Championship venue under its belt, specialist golf course constructor and water engineering contractor, MJ Abbott Limited, looks to have further consolidated its position as the company of choice for construction and remodelling projects and the installation and upgrading of course drainage and irrigation systems at Open Championship venues in the UK.

With its latest installation completed, the Wiltshire-based company has now notched up its sixth major project at Open venues in recent years.
It has nothing to do with chance, nor probability; it's their proven ability to deliver the highest quality results on time and within budget, while taking extraordinary care over the standard of reinstatement that has helped them achieve preferred contractor status at golf courses throughout Britain and continental Europe over the past 20 years.

These attributes have been reinforced once again on two major irrigation projects completed by the firm in the past 12 months; the first at Royal Liverpool and, more recently, at Muirfield in East Lothian, host courses for the 2014 and 2013 Open Championships respectively. Both were designed and specified by Adrian Mortram of irrigation consultants Robin Hume Associates and STRI Irrigation Services. 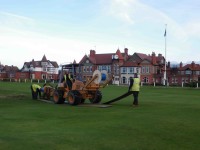 "MJ Abbott was selected not on price alone, but primarily as a result of recommendations from other high-profile links courses, including Royal Liverpool and Prestwick," explains Colin Irvine, course manager at Muirfield. "We were impressed particularly by the measures adopted by the company to minimise damage and disruption during every project and by the great care taken over reinstatement, a vital factor at Muirfield where we strive to maintain impeccable course conditions at all times."

A similar story is told by Royal Liverpool's Craig Gilholm, who added that price was not the overriding factor at a golf club where care of the course is a major priority.

"We wanted a reliable, proven contractor with all-round competence, capable of doing a first-class job and completing it on schedule," said Craig. "MJ Abbott also has significant resources in terms of skilled, knowledgeable staff and specialist machinery. This enabled our greenkeeping team to concentrate on other course improvement projects while the new irrigation system was being installed."

Rob McBurney concurs adding: "Price is important; value for money is also important, and MJ Abbott score highly in that respect. Their significant resources in terms of plant and staff also provided us with the assurances we needed that the work would be completed on time."

Steve Isaac, Director - Golf Course Management at The R&A, points out that the nine Open venues currently on The R&A's list are all maintained to a very high standard, so preparing a course for The Open is normally a small step up from their usual presentation.

"The R&A is looking for firm, running links conditions," he explained. "No specific standard is required other than the art of preparing the type of surface that we want. We work closely with the greenkeeping teams at each venue to ensure that this is achieved, weather permitting."

With regard to irrigation requirements at Open venues, Mr. Isaac said: "It is helpful if the course has irrigation to tees, fairways, greens approaches and greens. We are not concerned about watering the rough. The R&A will make a financial contribution for work if it is directly related to hosting The Open."

Completed and commissioned a little over 12 months ago, the installation at Royal Liverpool Golf Club comprised new water mains, a 550 cubic metre water storage tank and bespoke 85 cu m/hr pump station, an upgraded electricity supply and borehole transfer piping to provide water to all managed close-mown turf as well as longer off-fairway grass. Also included were four areas that will accommodate tented villages during the 2014 Open.

Greens Chairman, Rob McBurney, said that the new system represents a major investment by the club in the quality of its playing surfaces. "The previous system was 30 years old and failing. The new one, carefully and professionally installed on schedule, allows Craig and his team to target water more accurately where it is most needed, meeting Environment Agency best practice guidelines while helping the club provide members and visitors with consistently higher standard playing surfaces all year round."

At Muirfield, the new irrigation system represented a major upgrade to an existing Rain Bird irrigation system dating from the late 1990s. The club is working with architects Hawtree Ltd to carry out a substantial number of improvements to the course ahead of the 2013 Open Championship.

Commissioned in early April, the 22 week project was completed within the specified timescale, despite the course being closed for 24 days last winter due to heavy snowfall. Among the work carried out was new upgrades to the system supplying the greens, greens surrounds, tees, approaches and walkways, all linking to the existing fairway system.

Attention to detail - Making a (rein)statement

As with the installation carried out for Royal Liverpool Golf Club, and its many other fine turf projects, MJ Abbott laid boards across the turf to prevent machinery damaging access areas and adjacent surfaces. This is particularly important when using a mole plough to lay pipes below-ground. Boards are used also for temporary storage of soil excavated prior to sprinkler installation.

With new below-ground pipes in position, the turf was lifted and holes excavated by hand to expose the pipe ready for the connection of some 300 sprinklers by means of saddle joints. Having installed a triple swing joint, sprinkler head and decoder, selected indigenous subsoil was trowelled by hand into the holes before being heavily tamped down to minimise future settlement. Finally, the topsoil and turf were re-laid and the mole lines and sprinkler surrounds brushed and rolled with a vibrating roller.

All valve assemblies were installed on top of concrete slabs with gaps around pipe entry and exit points being blanked off using purpose-made blanking plates.
These touches provide the valve assemblies with a neat and tidy appearance that is maintained years after an installation is completed as it prevents soil ingress, sinkage and uneven boxes. Similar attention to detail is paid to the company's bespoke pump houses, electrical installations and control systems, which utilise the latest state-of-the-art technology accompanied by full on-site training for greenkeeping staff and managers.

"Of great importance to Muirfield was the excellent communication that existed between all parties at all times, especially as we had several projects running simultaneously," commented course manager, Colin Irvine. "It was important that everyone worked together as a team and MJ Abbott did just that, demonstrating both flexibility and excellent attention to detail.

"We had a lot of new turf to lay on the course and the firm's staff showed great awareness, care and consideration for all of the areas in which they were working."
Colin concluded by saying that he expected ground reinstatement to be carried out normally by course staff. "However, as we had been impressed by the quality and consistency of MJ Abbott's workmanship up to that point, we had every confidence that its staff would carry out the finishing work efficiently and to a very high standard. We were not disappointed."