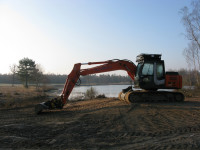 Last summer they completed Phase One at the part-woodland part-heathland development 20km south of Orléans, to convert two of the three 9-hole courses into one 18-hole course redesigned by Martin Hawtree and a separate 9-hole course.

Phase one comprised extensive tree clearance work prior to the development of the first nine holes, including the installation of primary drainage and a new irrigation system.

Phase two, which began in January, includes the reconstruction of the remaining nine holes including all greens, tees and 58 bunkers plus chipping and putting greens. The existing irrigation system has been replaced to irrigate the full 18 holes. MJ Abbott's site staff have also removed extensive areas of existing rock and timber lake edge detailing, replacing it with more natural rolled grass edges. 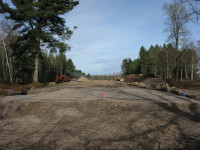 Owner Alfred Seydoux said that the contractor's familiarity with both the site and the architect's objectives was key to continuity and the success of the project: "I was pleased by MJ Abbott's professionalism, their capacity to listen to the architect and the helpfulness of the Project Manager."

"Our collective aim is to achieve a more natural look, from an American-style to an English-style design, better integrated with the surrounding natural environment. In addition to the work being carried out on the course, the clubhouse has also been redesigned. The new putting green and three new tees have been brought closer to it to create a more lively atmosphere. I hope that upon completion, Les Aisses Golf will attract new clientele. We hope to become one of the top ranked courses in France and to be considered as a venue for future European tournaments."

The project is due for completion in June.