Specialist sports turf contractor MJ Abbott Limited is working with Hackney Council and the London Development Agency to deliver a wide range of improvements to the sports pitches at Hackney Marshes as part of a multi-million investment programme to improve facilities at the unofficial spiritual home of Sunday League football.

Hackney Marshes has been a home for grassroots football since the 19th century, and many famous players began their careers there, including former England captains Bobby Moore and David Beckham. The site covers a record 80 acres and has the highest concentration of football pitches in Europe, with 73 pitches that see more than 100 games played on them every weekend.


Following the temporary allocation of East Marsh for the 2012 project, funds were provided to dramatically improve the quality of pitches currently not used on the North and South Marsh, with a working brief to reposition and regrade them to an exceptionally high standard. This will mean footballers have not lost any football playing space while East Marsh is temporarily used to support the Games. 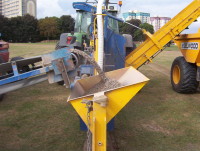 MJ Abbott were awarded the contract to carry out the major regrading and renovation scheme, which includes full primary and secondary drainage works and the repositioning of the whole ground pitch layout to accommodate a further nine football and three rugby pitches.

Noel Mackenzie, Director of Sports Turf Consulting, who was appointed to oversee the project, said the surface conditions at the site were extremely challenging: "In most instances we design and build a drainage system which collects and carries excess water away from the site and funnel it into the nearest natural tributary. Hackney Marshes is a unique case in that it was used as a disposal site for rubble and debris over many years."

"This has resulted in a 'double edged sword' situation. On the one hand the ground had its own layers of natural drainage filters which we were able to incorporate into the drainage scheme, allowing excess water to leach away naturally through the terrain without being fed directly into the river. On the other, we were faced with cutting through extremely hard layers of solid matter to install drainage trenches and pipes."

Nigel Wyatt, Contracts Director at MJ Abbott said that the firm's specially-adapted machinery meant they could approach the project with confidence: "Following a thorough tendering and assessment process, we were very pleased to be awarded this prestigious contact. We had a major advantage with the trenching machinery that we operate. In our workshops, we've developed and built machines to install both primary and secondary drainage systems that cope easily with sites used for filling and sites with underlying rock. Essentially they have rock wheels fitted with tungsten carbide cutting teeth fitted inside a housing that allows the excavated material to be collected and loaded into transport directly, ensuring that the playing surface is not contaminated with excavated materials."

"The machines are also laser guided to ensure accurate gradients are achieved, pipes are laid and trenches filled with the approved permeable material all in one operation."

Maintenance on the 12 pitches will continue over the summer with the project on schedule for completion in September. Hackney Council says the redevelopment will transform the site into an internationally recognised centre for football development, as well as a community hub for club cricket and rugby, and an accessible open space where local people can engage in physical activity.