0 MM50 is ACE for Devonshire Park

Following a successful trial period, Danny Negus - head groundsman at Devonshire Park International Tennis Centre in Eastbourne, has decided to use Limagrain's MM50 grass seed exclusively across all three of the sites he maintains. 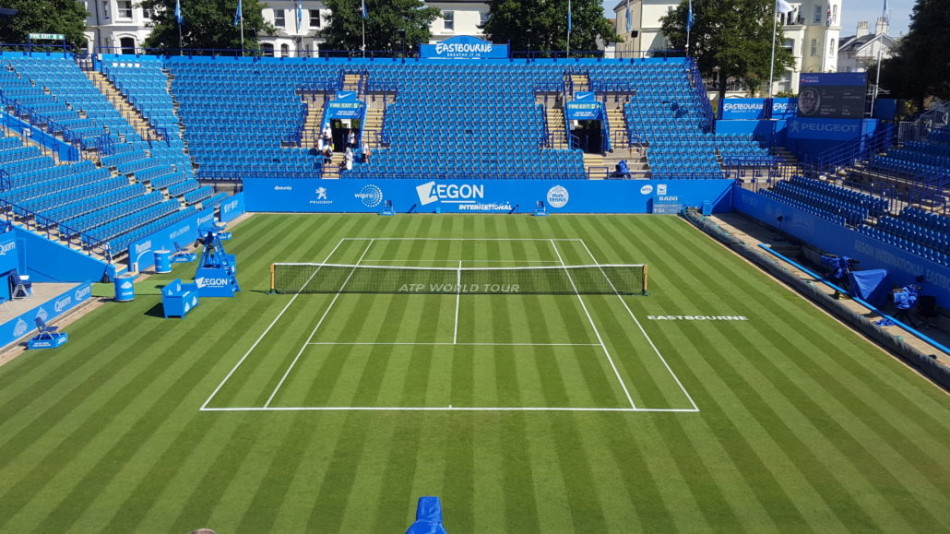 Danny has been working with sports turf throughout his whole career and after initially entering the industry as a greenkeeper, eleven years ago he got the opportunity to work within the sport he claims to love.

"I simply love tennis and I think it makes a difference. If you understand what the end use is, you can better perfect your craft. So when the opportunity came up to work at Devonshire Park - I just had to take it."

Danny has now been the head groundsman at Devonshire Park for the last eighteen months and admits that he is always striving for perfection.

"As the sport of tennis is getting more demanding, players are putting so much into their diets, their mentality and their approach to everything. Therefore it is only fair that we provide a surface for them to play on to do the same. I was looking for a grass seed to beat the standard we were currently at and that is why I decided to embark on the trial work."

Along with four other members of staff, Danny oversees the maintenance of not just the facilities at Devonshire Park but also the grass courts at the Meads Lawn Tennis Club and Moira House School - both of which are in Eastbourne. These various establishment offered Danny the perfect opportunity to put the seed to the test in three very different conditions - as he explains.

"I trialled Limagrain's MM50 last year throughout the three sites which consists of approximately 27 courts. We did this because I wanted to see the reaction of the seed on different sites in different conditions. There are a lot of micro climates around here and it enabled us to see how the seed responded in a tournament situation, and also from a club and a professional use. The results I got back from the trials revealed to me that it was absolutely a no-brainer to continue to use MM50 across all three sites."

Danny is just one of a number of groundsmen who has benefitted from using MM50 as it possesses exceptional shoot density along with tolerance to close mowing making it particularly suitable for grass tennis courts. Other key features include fast recovery from wear and damage and high disease resistance.

This superior mix contains the perennial ryegrass cultivars, Venice, Alison and Malibu, which are renowned for providing a great sward. MM50 is also treated with HEADSTART® GOLD - Limagrain's unique seaweed based seed treatment which helps to ensure rapid and even germination. This tried and tested grass seed treatment helps the seed get off to the best possible start - therefore it is ideal to use in the less than favourable conditions that can sometimes be found on tennis courts during renovations.

"What impresses me with MM50, is that within three days we can actually start to see the germination process," says Danny. "This is brilliant for us for when we have a short turnaround time of 15 days between tournaments.

"It has a recovery rate which I am really impressed with - every time that gets knocked the recovery is huge. The colour is fantastic and its reaction to light has been far superior compared to other grasses I have used. I think the blends are really good.

"Simply put, MM50 is the only seed that I use and will continue to use. That is throughout the season - in between the tournaments, any bits of minor renovation works such as baselines and for the main renovation works at the end of the season."

Pitchcare are appointed distributors of the Limagrain Seed range