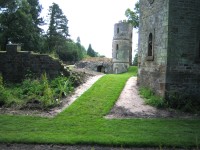 Lindum's Lokturf is playing an important role in the £15.2m restoration of Wentworth Castle Gardens, in Stainborough, near Barnsley.

2,700 sq metres have been used on the pathways and around the interior and exterior walls of the gothic folly built by Thomas Wentworth in 1727.

"We felt that the inside and outside areas next to the walls, like the pathways would have to sustain the highest footfall," explains Erikea Diaz Petersen of Hilary Taylor Landscape Associates, the historic landscape specialists in charge of the first phase of restoration due to be completed at the end of the year. "This garden is Grade 1 registered and it's also within a conservation area. We've designed one completely new garden east of the house but the project mostly involves restoration. We retained the original 18th and 19th century path structure and enhanced it with provisions to increase access for all although most paths follow historic routes. Some of these had become quite overgrown and others needed to be completely re-instated."

The Nottingham based company, which has been operating under it's present name for the last 7 to 8 years, but working with historic restoration for over 20, chose re-enforced turf over hard landscaping alternatives because of its aesthetic qualities and the desire to reduce the impact of hard finishes. "We also liked the fact that Lokturf is instantly usable," continues Erieka. 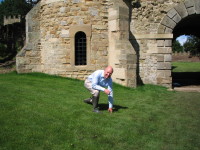 Lindum's MD Stephen Fell says that for this particular project durability was of the essence. "Lokturf is 40mm thick and produced by growing hard wearing grasses in a polypropylene fibre, reinforced Loksand rootzone supplied by Tarmac Topsport," he explains. "At Wentworth the turf was then laid onto a rootzone of Loksand, 60mm deep which gave a total reinforced depth of 100mm."

The turf, which went down in April/May has withstood the exceptionally high level of rainfall since, and according to Hilary Taylor Landscape Associates is so far performing well. "We're expecting visitor numbers of 70,000 per year when the entire project is completed" says Paul Johnson of The Wentworth Castle Trust, which was set up in 2002 as a registered charity. "It is important that the walkways and heavy traffic areas, not only enhance the nature of the gardens but also withstand the footfall."

For further information on Lindum's Lokturf contact the company on Tel: 01904 448675 or visit their website at: www.turf.co.uk