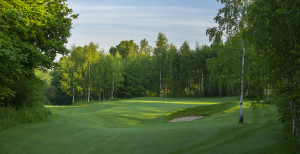 In front of Polish dignitaries and invited guests, the ceremonial ribbon was cut on the impressive opening hole - a stunning downhill par three.

Measuring just 560m (613 yards) and covering 2.5 hectares (6.2 acres), Orli Las is a championship course in miniature with multiple tee options, lush tree-lined fairways and stunning infinity greens. These unique features combine to create a short-course layout that can be enjoyed by players of all standards with only two clubs in under an hour.

Set out in an enchanted Polish forest with stunning lakeside views, Orli Las may appear unassuming on paper, but it punches well above its weight, as the resort's Director of Development Pamela Gromadzki explained. "Orli Las is a diamond of a short course but it is testing," she said. "It does that rare and wonderful thing of creating options for higher handicappers while setting a stern challenge for more experienced golfers. It is a very beautiful and challenging course - that's what makes it special."

She continued: "Orli Las will enrich what we offer at Modry Las. Visitors from around Europe can already play the award-winning Gary Player designed championship course with its sweeping fairways and deep bunkers, and now they can enjoy the beauty and challenge of Orli Las. We have a golf resort with 27 championship holes with some being longer than others, but all designed with the golfer in mind. It fulfils my dream to offer greater choices to today's golfer."

"It is a very scenic course set in an undulating forest on a beautiful lake edge," says the South African golf course designer Theo Geertshuis who carved the original 18-hole course at Modry Las that opened five years ago. "But although it is beautiful, it also presents an extremely rewarding challenge. On each hole, I tried to create intrigue to keep the golfer on his toes. I achieved this by incorporating illusions of distance so what you see isn't always what you get. In the end, Orli Las turned out to be one of the best short courses I have seen anywhere in the world."

Geertshuis says he broke established rules in order to create a course that focused on short-game skills rather than power off the tee. To fulfil his plan, the designer even installed flag sticks that were a third shorter than normal to give the impression of length when there wasn't any (the shortest hole on the course measures just 31m (34 yards).

"I had never done a short-game course before, but I had visited many," Geertshuis admits. "And then this opportunity came up and I grabbed it. I wanted to knock people's socks off. I wanted people to play Orli Las and think that it was a fantastic little track, but not be able to put their finger on why it was so good. I put together a whole bag of design concepts which has been wrapped up in a very special package."

The average size of the greens at Orli Las is just 120m2 but contained within each are numerous pin placements and countless breaks and borrows. Each green features undulations and testing surrounds that offer various approach options or recovery routes. A pitch and putt course Orli Las certainly is not.

"Modry Las was created to be played by people who love golf," said Gromadzki. "This ethos has been carried forward into our new nine-hole course which features all the drama of the championship course but on a smaller scale. Because it can be played by anyone regardless of skill or experience, and completed in under an hour, Orli Las addresses many of the problems confronting the game of golf today. For this reason I believe it is one of the most exciting new courses in Poland, if not Europe."