by Rob Bayliss
in Machinery & Mechanics, Drainage & Irrigation, and Golf
on 08 Apr 2016 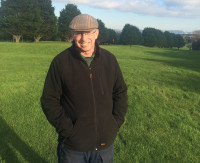 When the "course closed" sign goes up for weeks on end, as it often did, then drastic action needs to be taken. The lowest point for us came in the winter of 1993/94 when the course closed for eighty-three days, including the Easter bank holiday. In fact, parts of the course remained shut for more than a quarter of the year. Predictably, this caused an exodus every spring of disgruntled members leaving to play elsewhere, as well as a drop in takings at the bar. Here is how Weymouth turned a reputation from "always closed" to "rarely closed".

James Braid was hired to design a layout on the western fringes of a town that, despite being famed for its sandy beach, is mostly built on clay, Oxford clay to be precise; one of the heavier clays found in Britain which crops up around the country. Great for making house bricks, but not the ideal foundation to build a golf course; but then we are not all blessed with acid sandy heaths on our doorstep, so greenkeepers need to make the best of what they have at their disposal.

Mole ploughing was first introduced as a method of draining heavy clay soils on farmland. Most turf management books usually contain a brief item on the topic which normally harks back to its agricultural origins. The purpose of this article relates the experience we have gained and sets out to explain how the technique can be adapted to give good results on sports turf.

The essence of mole ploughing is to produce a continuous channel in subsoils that contain 45% or more clay. Mole ploughing as a drainage system is relatively cheap, but the channels are relatively short lived and may require renewing every few years. During the first few years, an annual programme is advisable as the cumulative effect of several years work will bring the greatest benefit. 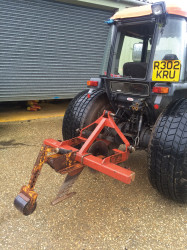 The aim is to run the mole channels into either an open ditch or above a pipe drain backfilled with gravel but, before you start running a mole across the course, you need as much information about the site and its idiosyncrasies as you can get.

Local knowledge should never be undervalued and anyone new to an area should find out as much as possible. The chances are that if you have a problem on the site then, at some time in the past, your predecessors will have tried to make improvements.

Plans are a good place to start. If you haven't got any old records locked away in a dusty cupboard, it may be worth investigating local authority records, or ADAS sometimes keep records and they could be worth a phone call.

If nothing turns up, all is not lost as you should be able to identify the route of old drains simply by observation. It should be possible to devise a plan of land drains around the course that you can mole plough into. A line along the lower side of a fairway is usually enough. But, if water is coming from higher ground, a catch drain to collect water before it reaches a fairway will greatly assist.

Initially, we trialed a Dabro Mole plough on our wettest fairways, because these determined whether the course remained open for play. The result was drier fairways, but the water was simply moved to the semi rough, so a plan of future drainage requirements was drawn up to take away the excess water. This consisted of a main drain alongside most fairways, feeding into our existing open ditches away from the main play areas. John Pierson was appointed as the contractor to install the main drainage, which included pipes from every bunker and amounted to just over 4,600 metres.

Timing of operation differs somewhat from agricultural practice in as much that their optimum conditions are a soft subsoil to take the mole plough, but firm on the surface to take the weight of the tractor. 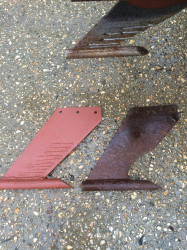 Our priority is trying to keep the course dry for play, so operations must start in autumn after the ground is sufficiently soft to take the mole plough, but before the ground gets so wet that you lose traction and damage turf.

The aim is to finish mole ploughing the entire course by Christmas at the latest, to get the best results. Finishing this early also gives the clay a chance to seal back up along the slits during the winter, thereby reducing the likelihood of large cracks appearing the following summer.

Textbooks generally recommend spacing between channels should be around 1.5m to 3m apart. But, in practice, spacing is dependent on the width of the tractor, simply because the wheels should be running over the previous line so that the weight of the tractor, bearing down on the slit, will press the ground back into place again.

If the mole run is to drain into a ditch, then obviously you need to lower the bullet into the ditch and pull away in the uphill direction. But, if draining into a backfilled pipe and trench, then drawing downhill towards the pipe will ensure the bullet is at maximum depth when crossing the pipe.

The mole channel should remain unbroken along the entire length to function properly, therefore closing the hole you're working on to golfers is imperative as you cannot raise the mole out of the ground once you have started a line. 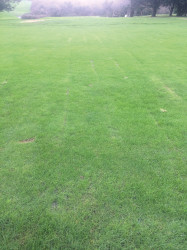 Various sizes of bullet are available; as a general rule, a smaller channel will take less water. Opting for too large a bullet is likely to create so much heave that surface damage will occur, which may not bother our farming friends, but is best avoided on fairways. We have found the optimum size to be around 40mm, as this is large enough to carry excess water away from any average size fairway without causing severe damage to the surface.

Another important benefit of mole ploughing is the fissuring effect it has on the soil. Walk behind a tractor drawing a mole plough and the heave it creates to the ground either side is plainly visible. In slow draining clays, I have found this to be a more effective method of aeration as conventional tine holes, that fill up with water with nowhere to drain away, can become saturated and create excessively soft ground conditions.

Trees growing close to the edge of fairways may be a problem where roots are close to the surface, which may prevent an unbroken run with the mole. If they are too thick for the mole blade or coulter to cut through, this needs to be considered when assessing the best direction to run the machine across your fairways. Ideally, you should be looking for a steady fall along the length of the channel, but this may not always be possible.

Blades wear out after about six fairways and will need to be replaced but, fortunately, they are simple enough for any well equipped workshop to fabricate new ones. We have found that treating both sides of the blades with hard facing rods is a worthwhile expense as it markedly prolongs the life of a blade

When we embarked upon our programme, a few sceptical members didn't believe it would make any difference, but even I was surprised at the change it brought about. As can be seen from the statistics, the system worked extremely well. 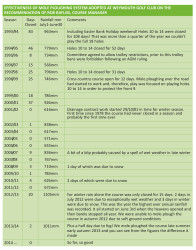 The benefits don't stop just at extra days open. Apart from drier fairways, it becomes possible to get maintenance equipment out on the course most of the year. There was a time when playing in winter just meant the difference between members using wide wheel or narrow wheel trolleys. The difference now is the course has to cope with members' powacaddies, ride on buggies and golf buggies throughout most of the year; a situation that would have been unimaginable at one time.

The improvement in drainage to the course has proven to be the catalyst that brought about a period of investment on the course. Greens, tees and bunkers all came under scrutiny as a result of members' greater expectations of the course. Greens that had never been drained since the day they were built were now expected to be playable under conditions where, in the past, the course would have been closed. So the installation of a network of pipe drains under the greens was now considered a high priority by the members. Similarly, every tee on the course was completely rebuilt with a full drainage carpet to allow play for a much longer season than was previously possible.

As an economic method of draining clay, I doubt it could be bettered.