by Neville Wilkes
in Consultancy
on 11 Mar 2004 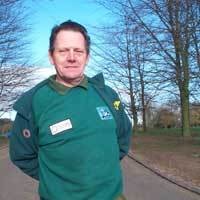 In the coming months Pitchcare will be featuring a number of interesting articles about wildlife. Neville Wilkes will be imparting well over 35 years of wildlife management experience and giving you an insight into their life cycle, feeding habits and characteristics of many types of animals and birds that live in the English countryside.

Neville has been actively involved in managing wildlife in Telford for the past 35 years, mainly in the capacity of Town Park and district landscape warden. Neville has recently retired from the council and now only works on a casual basis when required. The council now employ registered contractors for all pest control management.

Neville started his career in 1969 with the Telford Development Corporation, an agency employed to build Telford New Town in the late 1960's and, by the early 70's, had completed the first phase of the Town Centre. This included the Town Park, a 180 hectare site comprising formal and informal landscape areas where Neville was responsible for caring, monitoring and managing the wildlife.

The Park was transferred across to the local council, now called the Borough of Telford and Wrekin, in 1991. The Council then saw an opportunity to set up a district landscape warden service that included Neville and other colleagues and which would care for all aspects of wild life and conservation in Telford.

Neville has worked with many conservation groups and schools delivering lectures about wildlife. Neville is recognised by many organisations as being a expert authority on swan rescue, badgers and foxes coupled with a vast local knowledge of the wild life in Telford.

I caught up with Neville in Telford Town Park, with an opportunity to talk about moles. Moles are now becoming very active due to the recent increase in soil and air temperatures which results in increased worm and insect activity, a valuable food source for moles.

Neville and I are walking through the park and it wasn't long before we came across a series of mole hills. Neville explained that this was a typical mole site where 3-5 female moles were living and working. The site was only about 20 x 20 metres in size and had several fresh molehills.

The male mole will serve the females in March then leave them alone until late autumn when he may get a second chance to serve the females again. If not, he would then return the following March to start the process again. Moles do not hibernate but remain active all the year round.


The females may have two litters, having 2-6 moles per litter, one in spring and one in autumn. However, this can be dependant upon the weather and climatic conditions and the health of the mole. Usually the gestation period for moles is 6-8 weeks with the moles being born in mid April. The baby moles stay with their mother for 6 weeks, after which they then fend for themselves. The moles grow to about 150mm (6inches) in length when fully grown.

Neville stated most people believe moles are nearly blind and cannot see very much, but the main reason for this is when the fur grows it tends to be quite thick over their eyes, reducing their ability to see. However, their strong sense of hearing and smell more than makes up for poor vision.

Neville explained that moles live on average for three years and, when they die, other moles keep away from their site for 2-3 years. Moles only travel and move about 40 metres at the most and remain in their own territory for life.


Moles have very sensitive smell and hearing and do not like noise or vibrations, which is why you only find moles in relatively quiet areas. Constant noise will deter moles from the area, which explains why moles are not active in cattle fields, the vibration from cattle feet disturb the moles. This may also explain why active molehills are not seen on playing pitches and regular trodden fairways and fields.

Each female mole has her own set of tunnels that serve for feeding and escape. The mole will build a nesting area that is served by several tunnels. The tunnels vary in depth depending on soil structure and timing of year. They can be found at different depths ranging from 50 to 200mm (2 to 8 inches). The tunnels are generally deeper during the mating season as the nest will be about 200-250mm (8-10 inches) below ground.

Neville explained why moles had chosen this site, "It is quite near to shrubs and hedges that provide materials (leaves and moss) to make their nests. The area also has a drain nearby which would ensure that plenty of water and moisture was available near the site."

The mole eats a variety of foods, worms, slugs, and insects and is able to obtain these foods from underground and above ground sources. The mole will often come out of the tunnels early morning and feed on slugs, gaining both a protein and water intake in one meal. But, the main diet of the mole is worms which they are able to catch from their tunnels, especially during the spring when the soil is very moist. The mole has plenty of choice as the worms are very active near the soil surface, so the mole is able to feed from above and below its tunnels. However, as the summer months draw near the soils begin to dry out, forcing the worms down deeper, reducing the abundance of worms for the mole.

Moles have two main predators, foxes and owls. The foxes are able to dig them out, especially when they are in shallow tunnels, and owls are able to attack when the mole comes out to feed. The molehill is the result of the mole digging back into the tunnels, using his strong web like paws in a breaststroke fashion.

Neville spends a lot of his time being called out to control moles. His main method of control is trapping. Knowing when and where to place the traps is a skilled operation. Moles can easily smell human scent which may reduce the chance of success.

He places the trap outside (near to the site) overnight to remove any human scent and, the following morning, the trap is put into position in a active tunnel, which can be found by feeling the ground by the molehills.

Neville also stated that you could reduce the population by removing the male mole from the female territory, assuming you have the experience and 30yrs knowledge of how to tell the difference between a male and female!

Other forms of mole control are smokes that are placed in the tunnels, but Neville says that this method only moves the mole away for a while and they soon return.

In the old days he culled moles by using worms poisoned with strychnine. That worked very well, but is a restricted practice now, requiring permission and permits for use from DEFRA (the Department for the Environment Food and Rural Affairs).

Neville is licensed and registered to use Phostoxin tablets, which are placed in mole tunnels using an applicator. The moisture of the soil activates the tablet, which gives off a gas that kills the moles. However many councils, including Telford and Wrekin, have stopped using Phostoxin and use other methods to control moles. Many years ago Neville would keep the dead mole skin and hang it up for a week then sell it for six pence.

Neville believes that moles should only be controlled as a last resort, as they are very beneficial in controlling and maintaining a healthy balance of insects in the natural food chain.

One last interesting fact is that moles are only found in organic rich soils. Moles do not like clay soils and soils that are low in ph (acid soils) which is the main reason there are not many moles, if any, in Ireland where the soils are fairly acidic.