Monitoring is a very powerful tool if understood and utilised correctly. However, it has been written into many management plans without serious consideration of its implications. Words can lose their value and impact through both misuse and over-use, and monitoring may be such a word. The word monitoring is derived from Latin and means 'to warn, counsel, advise, prompt or remind'

The characteristics of a golf course are described through the vegetation which, in turn, is influenced by the substrate, i.e. moorland, heathland, links and parkland courses. However, this is where the objective definition ends and we are left to think subjectively, e.g. a poor heathland course that has become too much like a parkland course, or a links course that hasn't been managed sensitively and has lost its character.

The definition shouldn't end; with the correct skills, the turf manager should be able to understand what facility they are managing, what tactics need to be employed in order to obtain a better course and, ultimately, which effects can be attributed to management causes, e.g. why have I had an outbreak of disease? Why did that overseeding fail?

Monitoring can be employed as a management tool elsewhere to ensure quality standards are met or to answer strategic questions, e.g. how do we ensure that we have the right number of people employed? Why are membership renewals up this year?

Within the context of turf management, it is the role of the manager to ensure that the right species occurs in the correct place. Key to this is an understanding of the habitat that various species prefer, and managing appropriately.

I shall discuss monitoring in terms of species management; however, these same principles apply across all fields. Within species management, monitoring has a specific definition; monitoring is an ongoing programme of repeatable survey work which is capable of detecting change, and that change which exceeds certain predefined limits will then trigger action. This definition distinguishes between monitoring and similar data-collecting activities which could be termed as surveying and surveillance.

- A survey is a one-off event which is capable of collecting baseline data, providing it follows a standard repeatable procedure

- Surveillance is a repeated survey which builds a bigger picture and can be used to detect change. However, without trigger points, it cannot precipitate action

Monitoring is intrinsic to the management of the site/species. It is a very powerful tool, but it is a time-consuming and expensive activity and unfortunately, all too often, it is badly planned and implemented. Management plans frequently recommend undertaking such-and-such an action 'and then monitor' appears to be tacked on as an afterthought. However, the monitoring activity should be inherent within the initial design of the management plan.

Moreover, monitoring needs to be objective driven: the objectives describe the desired conditions, e.g. a management objective might be to maintain a population of Holcus lanatus, Yorkshire Fog, at 10% coverage.

In its most rigorous form, monitoring incorporates a research design which allows us to understand which effects can be attributed to management causes. A continuum of management actions from survey through to research are shown in the table. 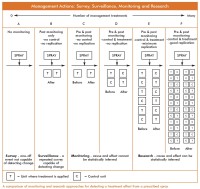 For each of the scenarios shown in columns B-F, statistical comparisons can be made between different time periods, and a decision can be made as to whether or not a statistically significant difference occurred. The interpretation of that difference can be confounded by factors that are independent of the treatment itself.

The table illustrates a continuum of increasing confidence in determining likely causation, as you move from left to right. In column B, there is no pre-treatment measurement, but we may see differences between years one and two after the spray. There is no way of knowing the conditions prior to treatment, and changes may be due to the spray, or they may be the result of some other factor, such as lower precipitation.

In column C, where data was gathered both before and after the spray, we still don't know if changes were due to the spray or some other factor that differed between the two time periods.

In column D, there is a single treatment unit and a single control unit. Perhaps we see a change occur in the sprayed area, but not the control area. The change could be caused by the spray, or there may be some other factor that differentially affects the treatment area compared to the control. The spray unit, for example, could have a slightly lower water table than the control unit, a factor independent of the spray but not apparent to the naked eye.

So, what does this have to do with managers on golf courses? We collect records and (hopefully) provide data that can be used to assess change - but is it monitoring? And, more importantly, do we even need to monitor?

If we wish to assess the efficacy of management on changing species, then we do need to monitor, and this monitoring has to be targeted on specific questions and should incorporate appropriate predetermined actions.

An ideal scenario would allow managers to publish their monitoring online for managers of other facilities to see what has been effective and, also, what hasn't.

Monitoring projects, where considerable effort is given over to defining objectives, optimising sampling designs, and determining how monitoring results will be used, are more likely to succeed over the long term. An effective monitoring protocol will provide more than a detailed description of field methodology. Careful documentation of the questions being asked; the sampling framework and survey design; procedures for collecting, managing, and analysing the data; and expectations on how the data will be presented and used, are all part of a successful monitoring programme. All of these points can also be useful in assessing whether or not a particular activity is, in fact, monitoring or something else entirely different, such as survey or surveillance.

Our records have the potential to warn, counsel, advise, prompt or remind, but only if implemented through effectively designed rigorous monitoring schemes employing an evidence-based approach.

The next time you see the word 'monitoring' used in a management context, test it to see if it really is - is there a specific question to be answered? Is there a repeatable methodology collecting data which are capable of answering the question, and are there trigger points that can result in action?