0 Montgomery Waters Meadow - some guys have all the luck?

Dave Saltman, turf maintenance contractor for Shrewsbury Town Football Club and Managing Director of Pitchcare, spoke to us about his pitch-fixing following a Rod Stewart concert at the Montgomery Waters Meadow, and current work in the run-up to the new League One season. 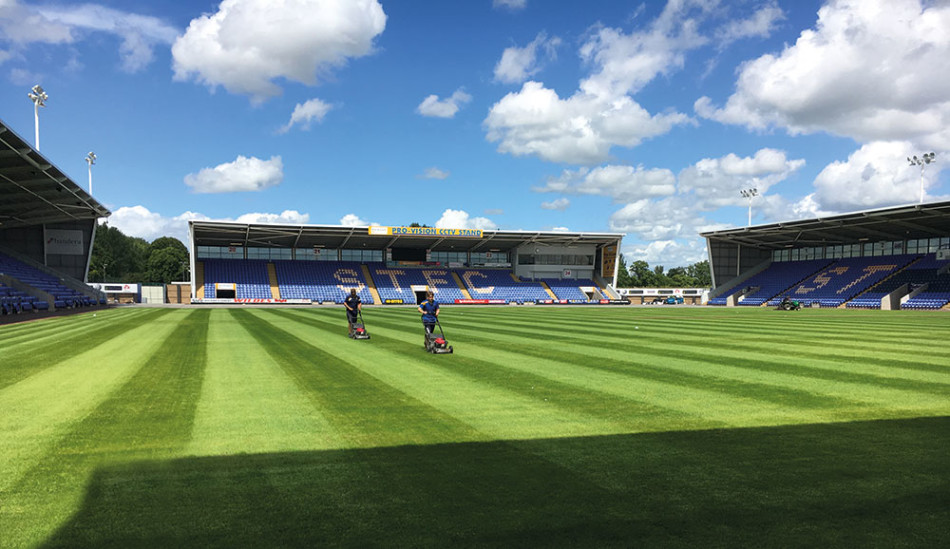 This is the third season we've been here with Shrewsbury Town. At the end of the season, we stripped the vegetation off the top with a Koro. We cultivated it, and then added about 120 tonnes of fibre-elastic material that we had managed to beg from Wolves' training ground. We spread that on, cultivated it in and then consolidated and re-graded the pitch to final levels.

We knew that we only had a few weeks before the promoters were going to move in for the Rod Stewart concert, so we worked hard to try to bring the grass up across the whole pitch.

At the original promotional meeting with Rod Stewart's company, we agreed that they were going to set up on Sunday 4th June, and then the whole pitch would be cleared by the following Saturday. We also agreed that the flooring for the spectators would only go down for three days, going down on Tuesday morning, with the concert on the Wednesday night, and coming back up by Thursday evening.

On the Saturday afternoon ahead of the concert, our plan was to oversow the pitch at the north end where the steel stage floor was going.

That was ahead of the stage flooring going down, and on the basis that if we seeded it on the Saturday afternoon, by the time the floor came back up again the following week, that seed would be germinating and starting to come through.

We knew we would lose existing grass at that end - it doesn't survive very well under steel sheets, particularly in the summer.

The rest of the flooring that went down was TerraPlas, which is good for grass pitches, because it lets water and light through, allowing the grass to continue to grow and flourish underneath whilst it's down.

We got the agenda through from the promotion company on the Tuesday of the week before the concert. We were told that the flooring company was coming in on the Thursday to set up, with the stage flooring starting to go down on the Friday.

This completely ruined everything that we wanted to do. We managed to get a fungicide down on the Wednesday.

But with the flooring going down so early, we decided it wasn't worth spending the money to seed the bottom end of the pitch, because if it began to germinate whilst still under the covers, it would just wilt and die off straight away. It would have been a waste of time and money.

Although they said they were going to set up on the Thursday and lay down the flooring on the Friday, to add insult to injury they started laying the steel flooring on the Thursday morning at 8 am. The spectator TerraPlas flooring started going down on Friday morning. Basically, the promotors stitched us right up. The only real bonus was that we'd managed to get the fungicide down in advance. 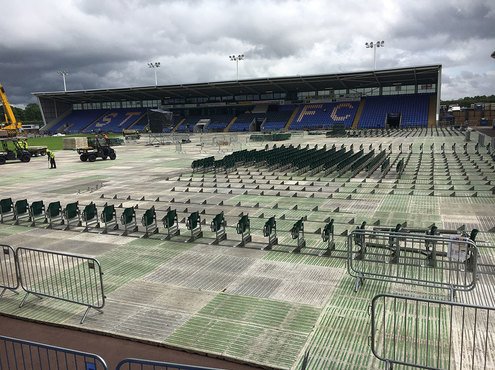 Concert flooring in place and one of the three lines

There was a big build-up to the concert, which was held on the Wednesday night and attracted a crowd of around 15,000.

The contractors started pulling the flooring and the seating out the following morning. We could see quite clearly that the spectator flooring had failed in places - where it hadn't been locked together properly. With the weight of the spectators, and additionally some forklifts that were being used across the spectator area for moving seating, the flooring had been pressed into the ground like a cake cutter.

I kicked up a massive stink. We weren't happy about anything they had done.

They managed to start work removing the steel flooring on the Friday evening, and they eventually had it out of the way, close of play, on Saturday night. During the day, Richard Barnett, our Groundsman at Shrewsbury Town, was brushing and scarifying as they were taking the flooring up.

On the Friday, we'd had mowers across the rest of the pitch, and we had also topdressed right through those three bad lines, with all the material we had left over from renovation. On the Sunday morning, the lads came in from our contracts division and we verti-drained the pitch, before dimple seeding the whole pitch again with more Limagrain MM60. We used five bags on the staging area, the bottom 2,000m2 of the pitch, and another ten bags covered the rest of the area. It was all then fed with granular and liquid feeds as well as some seaweed and Humimax.

What it all meant moving forward

At this point, we knew we had just under five weeks until the first pre-season game, which was against Aston Villa on the 15th July, which was a ludicrous timescale.

We were looking at the run-up to that game with a north end that was probably two-thirds dead, and the only saving grace was the area where the stage was, sat immediately over the northern goalmouth. Because of the heavy traffic - cranes, forklifts etc. - running around the outside to get the work done, the area around the goalmouth hadn't had quite as much pressure on it or compaction. We still had some grass there out to about the penalty spot.

That was a help, but the corner access got very heavily damaged. The concert contractors damaged three pop-up sprinklers on the east side, including the one in the corner, so that bottom corner was flooded.

It was sodden wet, stinking mess. 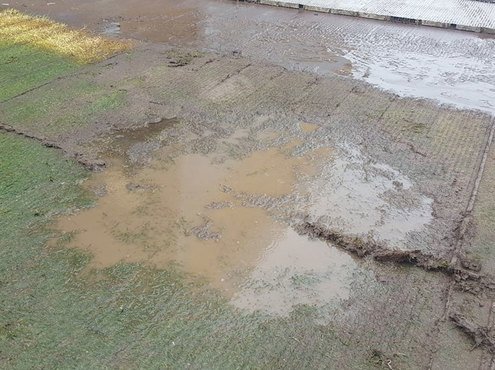 Corners heavily damaged before it starts to recover on the right

After the concert, we had it sprayed again the following Thursday with some more liquid seaweed as well as a liquid fertiliser.

Towards the end of July, we put down a half-rate application of 20-10-10 fertiliser ('Maxwell Premier Super') - a very strong, agricultural fertiliser. We put that down on the Thursday, seven bags more on

the Monday, and again on the following Friday. We really had to buzz it up with fertiliser to try to get it growing as quickly as possible.

We were cutting it every day, oversowing the patches every day wherever necessary. We were putting water on as if for fun, and because we were putting so much water onto the stadium pitch, the training ground out at the back didn't get any, which was far from ideal. We had just installed sand bands onto this pitch and, with the hot, dry weather, the grass just burned up. So, it was a tough call, but the stadium had priority with the looming fixtures.

We put some Maxwell Premier 12-0-6 granular feed down, more seaweed and another liquid feed of Sol Control 13-0-39 sprayed on at the beginning of July in the build-up to the Villa match. We then got the grass down to playing height, which for us was 25mm.

Another thing worth mentioning is that, at the end of last season, the manager decided that the pitch was small. He said it was too short and too narrow, so at the end of the season we dug out the football sockets for the second time in twelve months. Before that, the previous manager had reduced the size.

In the week before the game, other than helping around the ground i.e. putting steel fencing back up and getting dugouts back in position and various other things, we were setting out the pitch and marking out, and set in and concreted the goal posts and back stanchions sockets on the Thursday.

We continued to mow daily, including a couple of double-cuts the last two days. We heavily watered on Friday night, and again on Saturday after the pitch had its final cut followed by marking out. The pitch is young

We've got a good healthy pitch here. We recently sprayed with a precautionary fungicide. We had put some fungicide down prior to the concert, but we sprayed it again simply because of the number of games we had on the way. We needed to avoid the risk of disease with the warm and wet weather, and with much of the pitch still in immaturity, we put on an application of Bayer Interface.

It was a good crowd for a very early (15th July) pre-season friendly. There were over 5,000 here.

Shrewsbury won. Generally, they were very happy with everything. We were delighted with the pitch. It stood up very well. There was nothing more than the usual superficial scars and stud marks. There were no tears, no big lumps coming out.

We knew that we'd got root growth of about 65-70mm from the south end, right down to where the staging area had been, where it was already a good 30-35mm.

All things considered, we can say we've got it through exceptionally well. It's the shortest time span I've ever known to bring a pitch through from renovation.

Last season, I got Wigan's DW pitch up from seed to first game in five weeks and four days. Most groundsmen ask for around an eight-week window. But this has been even shorter than the window at Wigan - certainly four weeks and six days from seeding to the Villa game at the North End.

With the compaction issues we had at the north end, a lot of the grass didn't come through for fifteen days or more. It was real pressure, but that's good, because you look at it now and think 'anything's possible'. 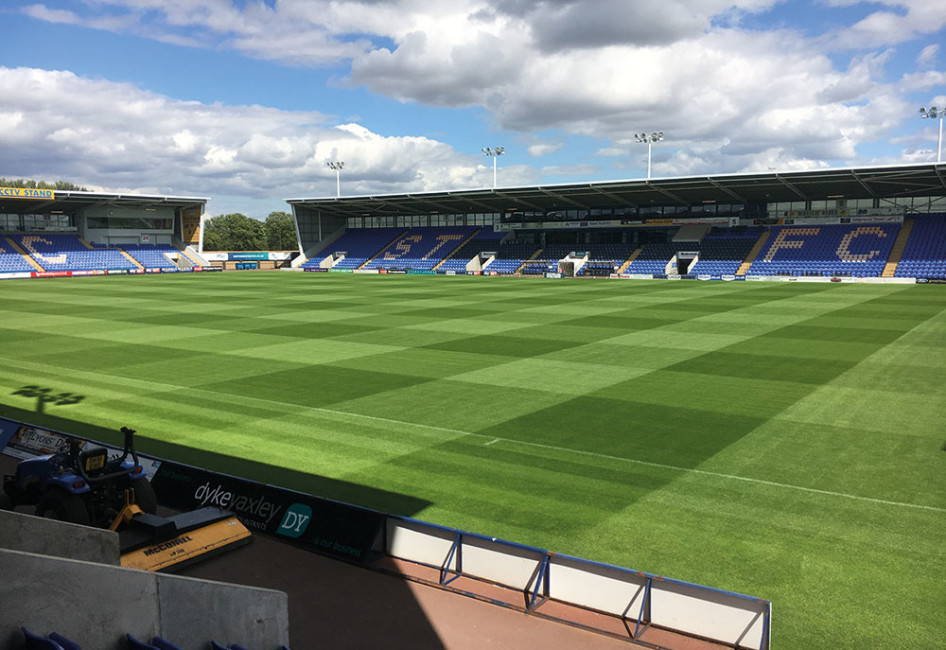 All ready for the first league game

Now, though, we are looking at a schedule that makes this forthcoming period just as difficult.

From now, we've got Wolves on Saturday, Cardiff on the Tuesday night, followed by Burton Albion next Saturday - all at home. So, that's three games in eight days coming up.

And the very next Saturday, the 5th August, we start the League One season against Northampton. I already know about some other third party fixtures to be hosted on the pitch this season, as well as the cup games. It will continue to be a busy season.

Taking the bull by the horns

You can force grass on. You've got to take the bull by the horns and get on with it. Be bold. If you've got fungicide down, and a good balance of nutrition and bio-stimulants, you can create a grass factory. You do need irrigation and we also used sheets to retain some warmth and moisture during germination, but if the weather is with you, everything is possible.

With all the feeds and water, coupled with the hot temperatures, we could expect to be able to cut the pitch twice a day every day, just to keep on top of it. It was growing in front of our eyes, something that we encouraged to get the grass established in such a short space of time.