0 Monty’s golf day at Kingsbarns raises over £40,000 for Maggie´s Centres 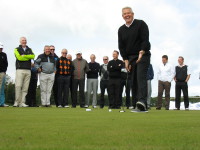 Scottish golf legend Colin Montgomerie has expressed his delight at the funds raised for the foundation set up in his mother's name by a special golf day at Kingsbarns Golf Links.

More than £40,000 was raised for the Elizabeth Montgomerie Foundation from the event on Monday, September 17 which was sponsored by the John Clark Motor Group.

The foundation was established in 2007 in memory of Monty's mother and is currently working to raise £4 million for two new Maggie's Cancer Caring Centres in Scotland which provide support for individuals and families affected by cancer. The centres are scheduled to open in 2013 in Aberdeen and Lanarkshire.

Around 60 golfers took part and were greeted by the victorious European Ryder Cup captain at the renowned modern links in the East Neuk of Fife. Monty gave the golfers some swing advice during his golf clinic and played with them at the par three 8th hole.

Speaking from Kingsbarns, Monty, the eight-time European Tour Order of Merit winner, said: "I'm delighted to see such a good turnout at the golf day which will raise a fantastic amount for the Elizabeth Montgomerie Foundation. Providing support to people who have been affected by cancer is so important and events like this give a great boost to our fundraising efforts. I hugely appreciate the support we have received from Kingsbarns Golf Links in donating the course for the day and John Clark Motor Group in sponsoring it. To play golf at Kingsbarns on such a beautiful day is a pleasure and I'm sure everyone taking part has enjoyed themselves enormously."

Alan Hogg, the Chief Executive of Kingsbarns Golf Links, said: "Colin has been a great friend of Kingsbarns over the years and we are proud to be able to support his fundraising efforts for the foundation. It is an extremely worthy cause and we are delighted to back it along with a number of smaller charities we support throughout the year. The course is in excellent condition as we look forward to the Alfred Dunhill Links Championship and I'm sure the golfers relished the opportunity to play it ahead of some of the world's leading golfers."

John Downie, Group Marketing Director at John Clark Motor Group, commented: "We have had some fantastic feedback about the event and about the golf course. We would like to thank the golfers who took part for their generous contributions which have given a considerable boost to our wider fundraising efforts."

Laura Lee, Maggie´s Chief Executive, added: "We are delighted that John Clark Motor Group and Kingsbarns Golf Links continue to show so much support to Monty's Maggie's Appeal. Through the golf day John Clark Motor Group are helping to keep the doors to Maggie's Centres in Scotland open whilst also playing a vital role in building a new centre in Aberdeen. We are extremely grateful to John Clark Motor Group for their support and would like to thank Colin Montgomerie for giving his time to make today such a huge success."