Whilst the quality of the club house is not usually a deciding factor when choosing where to enjoy a game of tennis, the spectacular Georgian mansion which provides the members' facilities at Moor Park near Rickmansworth in Hertfordshire could tip the balance.

Originating in parts from 1678, Moor Park mansion provides a fine backdrop to seven grass and six all weather courts. It is spacious enough to share with the golf club and social members too, as well as hosting corporate and private events throughout the year; plans are afoot to mount an exhibition displaying the numerous artefacts from the estate's history.

The golf club surrounds and works in harmony with the grounds, but maintenance of the gardens and tennis club is the responsibility of Head Gardener, Nick Cracknell, and his team, Keri Jarman and Rob Woods. 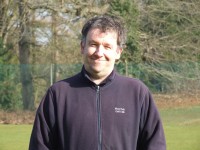 We look after the tennis courts, lawns, flower beds and trees, including some tree work on the two golf courses," explains Nick. "The immediate grounds total some six acres and, as well as providing a pleasant environment for the members, are used for filming, painting and photography classes and, in the summer, for weddings, so a high standard of presentation is essential."

The grounds, originally laid out by Capability Brown, have seen plenty of changes over the years. A parkland walk showcasing rare trees such as Cryptomeria has been grassed over, although its ornate stone benches and remnants of statues can still be seen. Elsewhere, a magnificent set of stone steps leading up to a statue and former skating pond await renovation; in common with many clubs, the recession has squeezed budgets for this type of work at Moor Park. 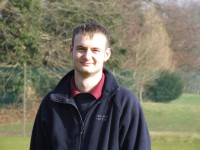 Photographs from the pre-war years show an Italian sunken garden to the rear of the mansion; this fell into disrepair when Moor Park was requisitioned by the First Airborne Corps who used it to plan the Battle of Arnhem. After the war the garden was turned into lawn, although the fountain remains and a later addition is a putting green in one of the most scenic locations possible - a notice warns against the temptation of chipping onto it from the golf course.

The yew trees which are painstakingly reshaped by Nick at the end of each winter could doubtless tell some tales: "We had to take one of the yew trees out as it was dying and, when we got down to the trunk, you could see it was at least 100 years old. The yews can be seen in the photographs from the 1920s, and they were over six feet tall then!" he says.

A more recent change has been to relay the lawn in front of the house and move the car park which divided it; a new flower bed across the drive decorates the boundary with the golf course.

Until recently the lawns were mown with the golf course's gangs, but Nick now cuts them by hand with Hayter Harrier rotaries for an improved finish. "There's a lot of debris to collect -from twigs and leaves to confetti, so the grass box is essential. We did try cylinder mowers but stones get thrown up onto the grass and rotaries cope better with this," he says.

A Kubota lawn tractor is kept for rough cutting, and a recent project was the fitting of Everedge lawn edging around the formal areas to keep stones from the gravel walkways at bay.

Other tasks include scarifying the lawns and feeding them a couple of times a year, whilst bedding plants are bought in as and when needed to fill planters and flowerbeds.

"We used to grow our own bedding plants but the greenhouse was one of the casualties when the old greenkeepers' complex was demolished, and has not been replaced," Nick laughs.

Three grass courts built to the north of the mansion were originally reserved for tournaments, a practice discontinued as it made the surface wear unevenly. These are earmarked for expansion should permission be granted to develop a driving range in the parkland and move a roadway adjacent to them.

To the other side of the building, there are four more grass courts, stepped to follow the contours of the site, three tarmac and three sand filled artificial courts.
Grass courts are played from May to September, whilst floodlights allow two of the all-weather courts to be used in the evenings year-round. 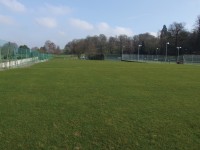 here were originally two more grass courts, but shading from the cedar tree behind them was affecting the turf, so they were turned over to artificial surfaces," explains Nick. "A further two tarmac courts next to the golf course had to be abandoned due to the risk of balls coming over."

Contractors, Court Care, carries out annual renovation of the synthetic surfaces, using specialist equipment to brush the carpet and remove the infill before filtering out debris and replacing the clean sand. A spray with a moss repellent completes the process.

"These courts need to be kept clean as part of our routine maintenance," explains Keri Jarman, "We use leaf blowers and ensure that any debris is cleared, otherwise they can flood."

One synthetic court is in need of a repaint, but Nick comments that surfaces have performed well under the club's chosen maintenance regime - expected to have a ten year lifespan, they have, already, been in use for more than twelve years.

An occasional pressure wash before renewal of the line markings is all that is needed on the tarmac courts. 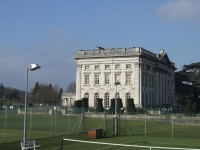 Preparation of the grass courts begins in March, although they are mown as required through the winter to a height of 12mm using a Hayter rotary; as the season approaches this is gradually reduced to 8mm with a Toro 3000 cylinder mower employed to produce the required finish.

Each grass court is remeasured, marked with a spray jet marker and the nets hung, a process which can take a day per court.

Once the season begins, daily mowing is completed by 10.00am, a process which Rob points out is made easier by the high output of the Toro 3000.

The club plays host to a number of tournaments, including an LTA rated junior members' event, and the purchase of a Poweroll 12 ride-on roller has been a tremendous help in preparation for these, says Keri: "We used to hire a roller in, but now we have our own, we can roll three times a week as the season approaches and immediately before a tournament. We also irrigate at night in dry weather, using a Rainbird sprinkler system, which is computer controlled from a central terminal in the golf course manager's office, and this makes the rolling easier."

The original irrigation source harked back to the club's history - water was gravity fed from a skating pond on high ground above the mansion, but has now been replaced with a borehole which feeds a holding tank. But every effort has been made to ensure that such a modern contraption does not interfere with the ambience of the parkland.

"The shiny metal tank could be seen through the trees in winter, so we purchased a quantity of camouflage net from a local army surplus store, which helps it blend in nicely," explains Nick.

When the season ends in September, the grass courts are scarified with a Graden and re-seeded before a contractor sprays for worm casts. Weather permitting, a tractor mounted spiker, borrowed from the greenkeeping team, is used to aerate the courts through the winter.

Nick and his team have access to some rather special help and advice - Wimbledon supremo Eddie Seaward drops in a couple of times of year to give his opinion on the courts.

"One of our members is also a member of the All-England Club and asked Eddie if he would help us out," explains Keri. "Eddie inspects the courts before the season starts and half way through the summer to see how they are performing and if anything needs doing. He has offered us advice on matters such as new grass varieties - in fact he suggested the varieties we use now - Aberelf and Aberimp, which are hard wearing dwarf ryegrasses giving a good level of winter green colour."

A smart new wooden pavilion nestles in the hillside behind the courts, being the latest investment in the members' comfort.

The close relationship with the greenkeeping team sees Nick help out with landscaping projects around the course, while he can call on the services of golf course mechanic, Shaun Lake, for maintenance and repairs of gardening machinery, including winter overhauls of the mowers.

In common with many sporting facilities, Moor Park was hit hard by the severe weather from December to February, with its elevated position catching more than its fair share of the snow.

"The club was closed for most of January, and we were kept busy with clearing snow and gritting steps," comments Nick. "You reach a point when the weather becomes a frustration because work is mounting up and you can't get on. Still, we are better off than the greenkeepers because there is more time for our turf to fight off any disease before the season starts. I prefer to keep spraying to the minimum where possible so, if the grass courts can 'heal themselves', so much the better."

When groundmanship offers a lifeline For Keri Jarman, dedication to his job at Moor Park is second nature, but his determination to carry on working when personal tragedy hit him has been recognised with an Unsung Hero award, presented at BTME by Terrain Aeration.

Keri's parents both died last year, leaving him to arrange care for his disabled brother, and he also suffered a broken leg after slipping on ice.

"My colleagues wanted me to take time off, but I only wanted to be away from work as long as was necessary to sort my affairs out. My work is important to me, and I needed to be here - the support of the Moor Park team took my mind off my troubles, and I just wanted to concentrate on my job," he says.

Keri has been in his present role at Moor Park since 2004, but worked at the club in his early career before stints at a nearby public course and the adjacent Sandy Lodge Golf Club. He lives close by and cycles to work in all weathers; he has clearly made an impression on his young colleague, Rob Woods, who came to the club straight from school: "I have never met anyone that loves their job more than Keri," he laughs.