Most new golf course irrigation systems nowadays are computerised and offer the same basic capabilities, whether they are field controllers out on the course or wall-mounted in the office. However, the latest controllers from John Deere have increased flexibility to meet greenkeeper's needs, and offer smart control options designed to save water and energy costs.

Customers now have the choice to design the ideal control system to assist in the efficient irrigation management of a golf course, with the operator at the centre of all decision making, and the ability to control the system from anywhere in the world using an internet connection. In addition, the latest systems can be upgraded at any time in the future, due to their design being focused on software and not hardware.

In Europe, the use of decoder-activated sprinklers has become the accepted method of operation. Unlike conventional satellite controller installations that generally use large quantities of field station wire, which is linked to each individual sprinkler head, a decoder-based system requires only two wires to run around the entire course or irrigation zone. This greatly reduces the cost of the wire, as well trenching and turf disturbance caused by installing sprinkler heads.

Decoders are attached to these wires and they, in turn, activate the solenoids on each individual sprinkler head, or valves operating blocks of sprinkler heads, when a coded signal is sent from the wall-mounted or field controller. Depending on the size of the course, using a decoder-based system could result in significant cost savings.

At the heart of the system is the Aurora wall-mounted controller, which can operate with either a wire path system or decoders, or a hybrid of both. This controller comes as standard with four data/communication ports. In addition to handheld radios, web enabled phones and sensors, these ports can be used for wireless links between controllers at hard-to-reach holes on the course, for example across roads or water hazards. It should be pointed out that these features are available without the need for a personal computer.

JD's base configuration wall-mounted irrigation controller can operate with either 125 or 250 decoders, and offers up to 32 independent programmes per day, with water budgeting from 0-99 percent. This basic system involves physically visiting each controller and hand-inputting the programmes, which works well for many courses.

An evapotranspiration (ET) meter linked to the system can precisely calculate the amount of water needed for irrigation, based on prevailing weather conditions and rainfall, to prevent the build-up of thatch and other diseases or stresses related to over or under watering. The controller also provides programming to the second, rather than the minute, which can lead to large savings over a season. Timing to the second also saves on electricity usage, as well as long-term wear on the sprinkler heads and pumps.

Due to the fact that you can input both sensors and communications devices, each wall-mounted controller essentially offers central functionality without the need for a PC. In addition, the controller can operate some competitive decoder systems without modification, which offers a useful opportunity when an existing irrigation system needs upgrading. Standard features also include 'budget adjust' and self diagnostics all the way down to the pilot valve on the sprinkler head. 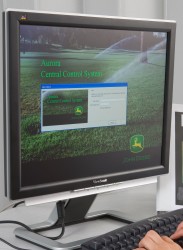 This standard, wall-mounted system can be upgraded if required to a Microsoft Windows-based central PC system. In addition, the extra features of the internet based eAurora controller allow complete management of the irrigation system from any web-enabled device anywhere in the world. This doesn't necessarily require the purchase of a PC dedicated to the irrigation system, or of expensive software.

With an eAurora irrigation controller, the user can log into the system on any internet capable PC, Blackberry, iPhone or Microsoft Windows SmartPhone, and can both programme and monitor the golf course via a GSM interface (GSM stands for 'Global System for Mobile communications', and is the most popular standard for mobile phones worldwide).

These advanced Aurora software-based irrigation controllers have two exclusive capabilities that no other controllers in the industry can offer. Firstly, they offer the ability to be upgraded at any time, so if you want to add specific features, you simply upload new software instead of having to physically replace the old controller.

Secondly, when you do upgrade, you greatly increase the number of possible programmes - up to 128 independent programmes per day, in any sequence, with multiple repeats and pauses - and enable another unique feature called 'peer-to-peer networking'. With this feature, each controller can communicate and share data with every other controller on the golf course.

On a practical level, this means greenkeepers can go to any controller anywhere on the course, and make and save changes to any other controller's programmes - in other words, you can manage the whole course from the controller nearest to you at the time.

Using this system can be compared to internet banking; individual records are secure, and logical menus and graphics make the input of programming data very straightforward. Programming and diagnostics can also be completed remotely by John Deere engineers if required. 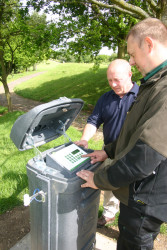 configuration is capable of handling pulse type sensors such as flowmeters; switch sensors such as pressure switches, wind and freeze sensors; and linear sensors including flowmeters, temperature and moisture sensors. It can programme, as well as read alarms, flow or sensor data from, any other controller out on the course. It can also act as an independent controller, with direct control of up to 250 decoder stations, or between eight and 48 conventional stations.

Real-time ET-adjusted irrigation schedules can be transmitted to each controller in the network, and software upgrades and related programming are handled automatically, which eliminates the time-consuming job of doing it yourself. There is also a comprehensive range of other irrigation management options including independent station control, report generation, alarm paging, and the ability to individually adjust each station's run time by percentage.

Course manager Mike Ward (front) and Paul Muddel of Irrigation Services (UK) Ltd of Norwich operating a John Deere Aurora pedestal controller at Glen Lodge Bawburgh Golf Club in Norfolk. This was the first course in the UK to feature a complete, fully working John Deere irrigation system, which was officially commissioned at the end of April 2009.

"We ended up utilising only about a quarter of our normal water usage in what was a very dry summer, during which we went eight weeks without rain," says Mike Ward. "This was across our existing 18-hole course and an additional new nine holes that are due to open this year. We think this was due to a combination of factors - for example, the ET meter linked to the system is adjusting the rate all the time, and I can also use my phone to make adjustments while I'm out on the course, based on what I'm seeing, without having to go back to manually operate the controller all the time. The big test will be this year when we run the system for a complete season across 27 holes, but obviously we're already seeing big savings in time and water usage."