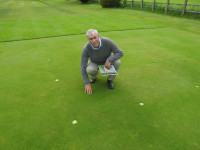 Limagrain UK will be establishing a new mixture trial and demonstration area of individual grass cultivars and mixtures at the STRI this year, enabling seed merchants and their customers to compare performance under different management regimes. Pictured is Limagrain's technical trials manager Richard Camplin at the site where over 100 plots were sown three years ago and which have already provided visitors with the opportunity to compare mixtures and varieties.

Limagrain's technical trials manager Richard Camplin explains: "In the summer of 2009, 120 plots were sown here at the STRI, including both single cultivars and amenity mixtures from the MM and Designer ranges. Two different regimes have been followed: close mowing, and a management which simulates the typical wear the a sports pitch would receive.

"A new demo trial - with 162 different plots - is set to be sown in the next few months. All will be under close mowing management and lawn/fairway management.

"Amongst the new and high performing cultivars to be sown in this next trial are: Nikky - a chewings fescue, and Cyrena - a perennial ryegrass, which were both new on the 2012 STRI List. Also to be sown will be perennial ryegrass Bocelli which will make its debut on next year's List."